Scott Morrison describes the “the bacon and eggs principle” where “the chicken is involved, but the pig is committed”. 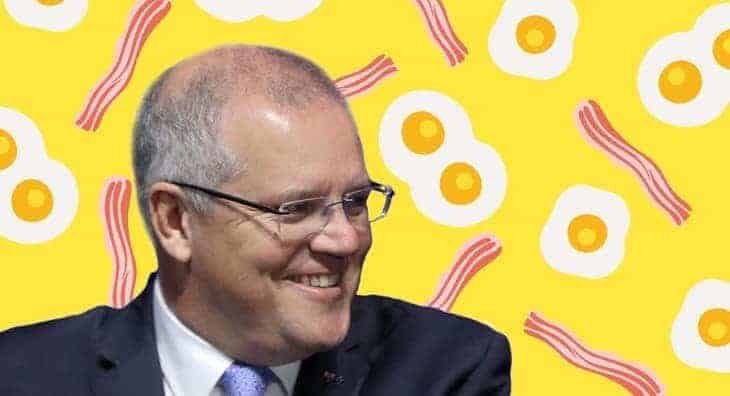 Scott Morrison has a sharp lecture for bureaucrats about their KPIs, in a comprehensive speech laying down how he expects the Australian Public Service to operate under his government.

Morrison stresses the service must be responsive to both its ministers and the “quiet Australians”, look beyond the noisy “bubble”, and be more open to outsiders, in a Monday address to the Institute of Public Administration, issued beforehand.

He calls for a “step-change” in improving delivery, greater diversity of views within the service, and the “busting” of regulatory congestion.

The Prime Minister is producing his blueprint ahead of formally receiving the report from the comprehensive review led by businessman David Thodey, which is coming within weeks – although Morrison has had discussions on its content and reportedly told the panel to take a tougher line on performance standards.

His speech themes build on views he has previously articulated, directly to departmental secretaries and in media comments. His focus is heavily on better service delivery, and his message to the bureaucrats is to remember they are on tap not on top. His concept is narrower than the ideas in a report, commissioned by the Australia and New Zealand School of Government (ANZSOG) and released last week, which highlighted the need for more creative thinking and a greater scope for public servants to speak truth to power in their advisory role.

In his speech Morrison also has very direct words for his ministers, about running their departments. Responsibility for setting policy lies with those elected, he says – ministers must be clear about what they are asking of their public servants.

They must not allow a policy leadership vacuum to be created, expecting the public service to fill it and do their job. One of the worst criticisms politicians can make of each other is that a minister is a captive of their department.

He says he has “selected and tasked my ministers to set and drive the agenda of our government”.

Morrison points out that accountability to parliament and the public for the government’s policies rests with those who are elected.

“Only those who have put their name on a ballot can truly understand the significance of that accountability. I know you [public servants] might feel sometimes that you are absolutely right in what you are suggesting, but I can tell you when it is you that is facing the public and must look your constituents in the eye, it gives you a unique perspective.”

He says his rugby coach used to describe this as “the bacon and eggs principle – the chicken is involved, but the pig is committed.

“That is why under our system of government it must be ministers who set the policy direction.”

Morrison sets out six “guideposts” for the evolution of the public service and his priorities:

On implementation, Morrison says: “Ensuring services are delivered seamlessly and efficiently, when and where they are needed, is a key priority of my government.

Good government is about receiving excellent policy advice. But that advice is only as good as the consideration in detail that it gives to implementation and execution.

And this is not an exercise in providing a detached and dispassionate summary of risks that are logged in the ‘told you so’ file for reference in future memoirs.

It’s about telling governments how things can be done, not just the risks of doing them, or saying why they shouldn’t. The public service is meant to be an enabler of government policy not an obstacle.

Morrison says the thinking behind his establishment of Services Australia – in the post-election reshuffle – “isn’t some fancy re-branding exercise.

It’s a message to the whole of the APS – top-to-bottom – about what matters to people.

It’s about ‘doing the little things well’ – everything from reducing call waiting times and turnaround on correspondence right through to improving the experience people have walking into a Centrelink office.

Highlighting the “quiet Australians”, Morrison says “the vast majority” of people “will never come to Canberra to lobby government. They won’t stay at the Hyatt. Or lunch at the Ottoman. Or kick back in the Chairman’s Lounge at Canberra airport after a day of meetings.”

But these members of the public are the public service’s stakeholders – not the “vested and organised interests that pretend to this status,” he says.

I want the APS to have a laser-like focus on serving these quiet Australians. Those you don’t meet with and never hear from. Australians who just get on with it, but who often feel their voice gets drowned out by shoutier ones in our public square.

There is strong evidence that the ‘trust deficit’ that has afflicted many Western democracies over recent years stems in part from a perception that politics is very responsive to those at the top and those at the bottom, but not so much to those in the middle.

This will not be the case under my government.

Middle Australia needs to know that the government (including the public service) is on their side.

Declaring the public service should value diversity, Morrison says “a commitment to diversity should encompass diversity of viewpoints within the APS. There is compelling evidence that this helps teams find answers to complex problems by bringing together people who approach questions from different points of view.

It’s vital that the APS avoid the sort of stale conventional wisdoms and orthodoxies that can infuse all large organisations.