Scotland vote fires up those hoping to change Australia’s flag

"The notion that if Scotland leaves the union that we should possibly have to change our flag, it shows the absurdity of our flag," says Ausflag boss. 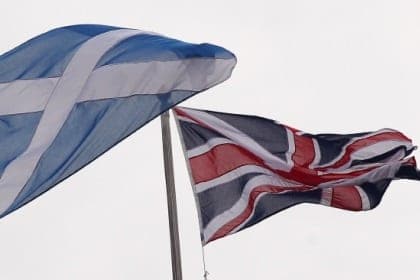 Proponents of changing Australia’s flag say this week’s referendum on Scotland’s independence highlights their cause, regardless of the result of the vote.

The British Union Jack flag is comprised of intersecting crosses, including the diagonal white St Andrew’s cross of Scotland. Should Scotland secede from the UK it is possible that the remainder of the UK may adopt a new form of the Union Jack, without Scotland’s cross, although there is no legal reason for having to do so.

Subsequently, it is argued by some that Commonwealth flags that include the Union Jack, such as Australia’s, should follow suit. Again though, there is no legal requirement to do so.

Many dismiss the very idea that Australia should change its flag along with Britain’s, arguing the Union Jack on Australia’s flag represents a part of the nation’s history, separate from modern political realities.

However, the chief executive of AusFlag, a leading organisation championing the idea of dropping Australia’s current flag altogether, says the current debate around the Scottish vote merely highlights the need to adopt a new national standard.

“The notion that if Scotland leaves the union that we should possibly have to change our flag, it shows the absurdity of our flag,” Harold Scruby told Fairfax.

“We are not a colony, homeland protectorate or dominion of Great Britain.”

AusFlag was founded in 1981 and says it has received over 50,000 designs for a new Australian flag.

While Mr Scruby acknowledges that under the current prime minister, Tony Abbott, change is unlikely, he could foresee that “the new flag may come from a conservative government”.

New Zealand may get there first though. Earlier this year, Kiwi PM John Key promised a vote on changing that country’s flag which could take place next year.

A recent survey by the UK’s Flag Institute revealed that 64 per cent of Britons supported altering the Union Jack if Scotland were to secede following the independence referendum.