Rudd in Indonesia for bilateral talks

Prime Minister Kevin Rudd is in Indonesia for talks with President Susilo Bambang Yudhoyono on the asylum seeker issue and trade. 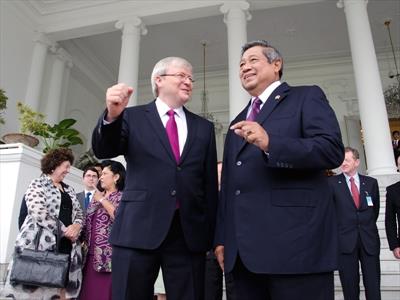 But he has hosed down speculation about an imminent deal with Indonesia to fight people smuggling and stem the flow of asylum seeker boats to Australia.

The prime minister reiterated that asylum seeker policies were not “etched in stone” shortly after arriving in Indonesia on Thursday.

Mr Rudd’s Friday meeting with President Yudhoyono will take the “overall temperature” of the relationship between the two countries, he has said.

While there, he’s expected to also respond further to his decision to allow the ALP national executive licence to intervene in the workings of the NSW branch to root out corruption in its ranks.

Opposition Leader Tony Abbott will be in Sydney.