WA Coroner Alastair Hope says all 102 lives lost in the Siev 358 asylum seeker boat tragedy could have been saved if authorities had responded sooner. 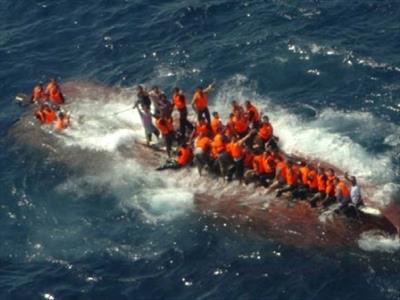 AUTHORITIES could have prevented the deaths of 102 asylum seekers who drowned after their termite-ridden boat capsized in the Indian Ocean, a court has heard.

On Wednesday, retiring West Australian Coroner Alastair Hope handed down his findings into the sinking of the Siev 358, a rickety wooden fishing vessel overloaded with 212 passengers and crew when it flipped between Indonesia and Christmas Island on 21 June last year.

He was inquiring into the deaths of the 17 whose bodies were recovered.

A further 85 went missing and are presumed dead.

Not only was the boat unseaworthy, it was being crewed by inexperienced and inattentive people smugglers, and was pummelled by waves that filled the hull.

The WA Coroner’s Court heard one crew member who was meant to be monitoring machinery below deck fell asleep, failing to notice the bilge pump had become dislodged, also causing sea water to be pumped into the vessel.

The boat capsized almost 32 hours after the first distress call on June 19, which was made via satellite phone to the Australian Maritime Safety Authority’s Rescue Coordination Centre (RCC).

Under a 2004 agreement between Australia and Indonesia, the nation that receives the first distress call is responsible for a rescue.

But the line kept dropping out and there were language barriers.

It was more than three hours later before the caller provided the boat’s location, saying it was now “broken”.

RCC then asked Indonesian authorities to assume responsibility for the rescue. Some seven hours later, they sent through a fax saying they had done so, but it was clear no vessel or aircraft was ever sent by Indonesia to assist the Siev 358, Mr Hope said.

The desperate and terrified survivors were ultimately found – clinging to the upturned hull and some in the water – by a merchant ship.

Mr Hope deemed the tragedy a terrible accident, and his top recommendation was for Australian and Indonesian authorities to work together to improve communication during search and rescue responses.

Mr Hope was also highly critical of Customs and Border Protection for not sufficiently helping the coronal investigation.

Classified material, including a comprehensive review of the incident by Customs’ national director Jeff Buckpitt, was not supplied to a separate WA Police investigation, despite requests.

The report contained information that would have been of great help to the WA Police, Mr Hope said.

Customs’ failure to at least advise WA Police of the existence of the report resulted in a substantial duplication of effort, Mr Hope said.

“In my view, the approach of the Commonwealth … was not helpful and not in keeping with what should be the spirit of such investigations,” he said.