Protests have erupted in Jakarta as Prime Minister Tony Abbott responds to Indonesia's call to explain the tapping of the president's phone. 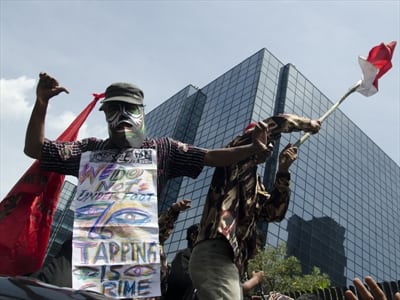 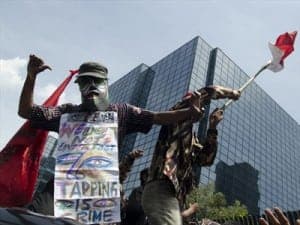 THE Australian embassy in Jakarta is being pelted with eggs by protesters as Prime Minister Tony Abbott responds to calls for an apology from Indonesia over the phone-tapping scandal.

More than 1600 police have been deployed near the Australian and US embassies plus several other potential targets in the capital ahead of members of the hardline group, the Islamic Defenders Front (FPI), attending rallies after Friday prayers.

Protesters, from the Komando Pejuang Merah Putih (Red and White Fighter Commandos), have burnt photos of Mr Abbott and for a second day called for war with Australia while demanding the Australian ambassador, Greg Moriarty, be expelled from Indonesia.

“Our nation has been insulted by Australia. Let’s attack them,” one shouted outside the embassy on Friday.

Mr Abbott, who has promised a swift and courteous response to President Susilo Bambang Yudhoyono’s call for an apology, met with the national security committee of cabinet on Thursday and was declining to comment on Friday.

Indonesians are angry over reports Australia tapped their president’s phone, and that of his wife, in 2009 and they want Mr Abbott to apologise and explain how and why it occurred.

Indonesia’s former intelligence chief said the diplomatic row could be resolved with an apology.

Mr Hendropriyono admitted in a 2004 television interview that Jakarta had spied on Australia.

Since this row began, Indonesia has halted co-operation on tackling people smuggling and the sharing of intelligence. Military exercises scheduled to take place in Darwin have been put on hold.

“If it happens within Indonesian borders, then it’s our responsibility and we will handle it alone.”

Gita Wirjawan, Indonesia’s trade minister, has warned his country may suspend talks on a comprehensive economic partnership agreement with Australia.

The minister has also reportedly asked Indonesia’s parliament to revise a law to allow Indonesia to import live cattle from countries other than Australia.

“It’s too sensitive to talk about,” he told AAP.

Immigration Minister Scott Morrison declined to comment on the state of border protection activities with Indonesia.

But he said Australia’s operation sovereign borders was continuing and was “designed to ensure the operation stands or falls on no single measure”.

“We have the ability to work through our chain of measures to ensure that whatever circumstances we face … we are able to adapt and ensure the people smugglers will be frustrated,” Mr Morrison said.

He said the issues between Mr Abbott and President Yudhoyono were being addressed by them personally and he would not comment further.

“If he (Obama) had been aware he wouldn’t have authorised it, and he could certainly say for the future that it wouldn’t happen again,” she told CNN.

“I think that that’s an appropriate response from Australia to Indonesia at this very difficult time.”

“If Tony Abbott were to say `gee I’m sorry about that’, that would reveal that in fact, the allegation was true,” he told Sky News.

A second group of protesters, from the Islamic group Hizbut Tahrir, later arrived at the embassy where they demanded the Australian ambassador be expelled.

To a chorus of shouts of “God is great” and “Australian dogs”, a spokesman for the group said over a microphone that it would be legitimate to spill Australian blood in response to the spying revelations.

“What Australia did to Indonesia, the infidel, their blood is legitimate,” he told the crowd.