Poll boost for ALP after PNG policy on asylum seekers

Kevin Rudd’s tough new stance on asylum seekers arriving in Australia by boat has boosted the ALP’s standings on the issue, the latest Newspoll shows. 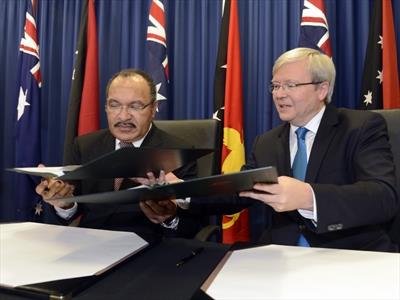 KEVIN Rudd’s tough new stance on asylum seekers has lifted Labor’s standings on the issue to its highest level since Julia Gillard’s proposal for regional processing in East Timor during the 2010 election.

Mr Rudd announced on Friday that asylum seekers arriving by boat would not be settled in Australia.

The news has lifted Labor’s standings on this issue, with the latest Newspoll, in The Australian newspaper on Tuesday, showing support for Labor rose six percentage points to 26 per cent, while the Coalition’s dropped 14 points to 33 per cent, compared with February results.

The results were greatest in Sydney’s western suburbs where there was a three percentage point rise among ALP voters who believe Labor is best able to handle the issue of asylum seekers.

There was a rise in coalition supporters who now favour the ALP, up from four per cent to seven per cent.

Labor supporters who believed the coalition was best able to handle the task also fell massively from 21 to five per cent.

“Coalition supporters remain overwhelmingly supportive of Tony Abbott’s approach to asylum-seekers, with 71 per cent nominating the opposition as the best to handle the issue, down from 80 in February,” The Australian said.

“Labor’s 26 per cent is the highest in Newspoll surveys since August 2010 when it hit 29 per cent after Ms Gillard announced a plan to establish a regional asylum-seeker processing centre in Dili.” – AAP