The federal police commissioner has been asked to investigate whether border protection personnel committed a criminal offence during an asylum boat turn-back. 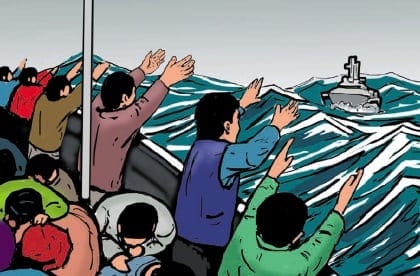 Federal police will be asked to investigate whether Australian border protection personnel committed a people-smuggling offence while turning back an asylum-seeker boat.

But in a case of the government judging itself, it will be up to Attorney-General George Brandis to decide whether anyone will be prosecuted.

Indonesian navy officers claim Australian authorities added three people to an asylum seeker boat before sending it back to Indonesia in the past week.

Labor is demanding an explanation from Immigration Minister Scott Morrison while the Greens are calling on Australian Federal Police commissioner Tony Negus to investigate whether an illegal activity has been committed.

International law expert William Maley believes that might be the case.

There was a distinction between pushing back a boat and placing people, within Australian territory, on a boat to send them back, he said.

“Because arguably the latter falls within the definition of people smuggling,” Professor Maley told the ABC.

Criminal action could be taken against those involved in the on-water operation and others “right up to the top level of the government” who were responsible for organising the turn-back.

Any action would require the consent of Senator Brandis, a requirement that raises concerns about a conflict of interest with his role as a cabinet minister in the Abbott government.

Mr Morrison so far has declined to comment on the incident, citing operational security reasons.

The opposition and Greens are more forthcoming.

“It’s not good enough to go out there and chest-beat on the good days and be silent on the bad days,” Labor immigration spokesman Richard Marles said.

Greens senator Sarah Hanson-Young says transferring people who were in Australia’s jurisdiction to a boat bound for Indonesia was legally questionable.

Because the maximum penalty for people smuggling was 10 years imprisonment, the boat turn-backs were putting border protection officers at risk, she said.

Mr Turnbull, a lawyer before he entered politics, said while Operation Sovereign Borders complied with international law, no-one was entirely comfortable with the policy.

“We have harsh measures (and) some would say they are cruel measures, but the fact is if you want to stop the people smuggling business you have be very, very tough,” he told the BBC.