Labor and the coalition have continued the blame-game over asylum seeker boat arrivals, after another boat sank and claims of rape on Manus Island. 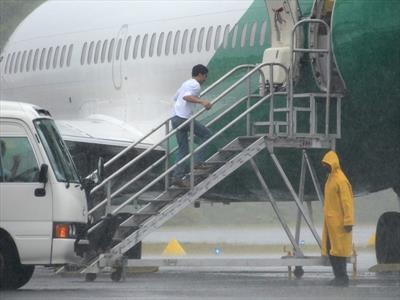 PAPUA New Guinea has warned Labor and the coalition not to impugn its dignity over the asylum seeker issue, with 70 men flown out of the Manus Island detention facility amid allegations of rape and torture.

Immigration Minister Tony Burke is due on the island on Thursday to see for himself conditions at the centre after speaking with the whistleblower who made the claims.

It’s not clear if the group which left on Wednesday included the alleged offenders.

But Mr Burke had said he would remove them before Australian authorities begin transferring people to the island under Labor’s new hardline policy to stop the flow of asylum seeker boats.

Whistleblower Rod St George alleges up to half a dozen men were assaulted and sexually abused by some detainees, others were forced to sew their lips together and one had solvent poured into his ear.

“I’ve worked with some of the worst criminals Australia has and even they have a clearer sense of decency than what I witnessed there,” Mr St George told SBS’s Dateline program.

Under the federal government’s deal with PNG, people arriving by boat will be denied resettlement in Australia, be taken to Manus Island for processing and if their refugee status is approved, resettled in PNG.

Prime Minister Kevin Rudd said he made no apology for the government’s tough stance, after a boat with around 204 asylum seekers sank off the Indonesian coast of Java.

A baby boy, a 10-year-old girl and a woman died in the incident and as many as 157 people have been rescued, according to Associated Press.

The boat sank in heavy seas off the Indonesian fishing town of Cidaun in western Java.

Opposition Leader Tony Abbott pointed to Mr Rudd’s record, saying it was his government in 2008 that dismantled the Howard government policies which had “worked” to stop the boats earlier in the decade.

“This is a tragic reminder of what happens when policy change in Australia puts the people smugglers back in business,” Mr Abbott told reporters on the Gold Coast.

“The only way, I submit, to stop the boats is to change the government.”

Mr Rudd again rejected Mr Abbott’s claim the deal with PNG, under which Australia has agreed to provide further aid, was a “cash splash” that wouldn’t be accountable to taxpayers.

“Partisan politics aimed to, frankly, derail the regional resettlement agreement is just an appalling approach to the responsibilities of the highest office of this land,” Mr Rudd said.

PNG High Commissioner Charles Lepani issued a warning to “Australian politicians to observe international protocols and courtesies … and not impugn the dignity of our leaders, who are attempting to assist Australia in this very complex regional and international issue of asylum seekers.”

Mr Abbott on Tuesday said PNG Prime Minister Peter O’Neill made it “pretty clear” the government had “subcontracted out to PNG the management of our aid program”.

In Port Moresby, Mr O’Neill told reporters the resettlement deal was an expansion of the existing aid program. –AAP