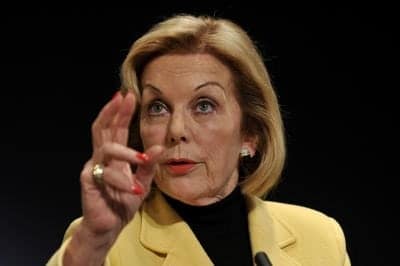 The Australian of the Year said it was unfair Ms Gillard cops flak for irrelevant things like her clothers, empty fruit bowl and her hair.

“Why do we focus on these silly things?”

She said it was “wrong to talk about (Ms Gillard’s) body shape”.

“I thought we’d get over this by now. Sometimes you just want to weep.”

Ms Buttrose said she had no problem with Ms Gillard facing criticism for policy decisions.

“The prime minister is a big girl and tells us she’s tough,” Ms Buttrose said.

Ms Buttrose called for the introduction of quotas to address the minority representation of women in boardrooms.

“I think it’s absolutely pathetic that only 15 per cent of directors of the top 200 companies are women,” Ms Buttrose said.

“We’re supposed to be enormously grateful for this progress; it’s the most we’ve ever achieved.”

The former magazine editor was appointed to the board of Australian Consolidated Press in 1974 because Kerry Packer had a revelation that it was “women who actually bought the products we produced”.

“It was women buying the Australian Women’s Weekly, the cash cow of the company that made the Packer fortune,” Ms Buttrose said.

“He figured out to understand women better it would be handy to have a couple of us on the board.”

Ms Buttrose admitted she had been approached by both sides of politics several times to run for parliament but said it wasn’t for her.

She said it reflected how unbiased she was as a journalist.

“Sometimes I think it’s better to be a free spirit and it’s handy to have someone who … doesn’t compromise and is prepared to say what they think,” she said. – AAP