Pensioner gets prison time after being bust for drug-related import

Man aged 65 is the second person to be sentenced for attempting to import 1,2 tonnes of ephedrine into Australia. 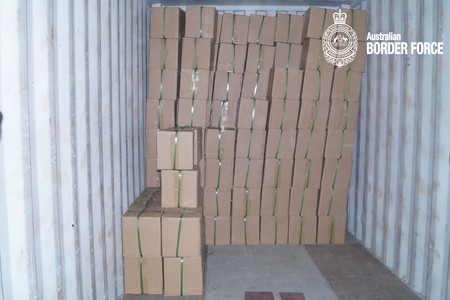 Part of the consignment of ephedrine intercepted by the Australian Border Force. Photo credit: ABF

A 65-year-old male is to spend many of his retirement years in prison after being sentenced to eight years and six months for his part in illegally importing 1,2 tonnes of ephedrine in September 2019.

He was sentenced in the Downing Centre District court in New South Wales and has a non-parole period of four years and six months. The means he will be eligible for parole in March 2024.

A second suspect in the same case, a 23-year-old man, was sentenced in March to seven years in prison, with a non-parole period of four years, for his part in the importation.

The investigation began on 10 September 2019, when a shipment declared as furniture was X-rayed by Australian Border Force (ABF) officers at the Sydney Container Examination facility. During the X-ray, officers noted anomalies in the contents of the container.

A physical examination of the container revealed 127 boxes hidden behind a large amount of wooden furniture which included chairs, tables and couches. The boxes were found to contain a brown substance.

Presumptive testing of the substance returned a positive result for the border-controlled drug ephedrine. Ephedrine is a precursor substance used in the manufacture of the drug methamphetamine, also known as ‘ice’.

ABF officers then conducted a managed delivery of the container to an address in Roselands, a suburb in south-western Sydney. A short time later, they arrested two men who were observed accessing the container.

The pair were charged with importing a commercial quantity of a border-controlled precursor contrary to subsection 307.11 (1) of the Criminal Code Act 1995.

“Detections like this highlight the strong demand for precursor chemicals to manufacture illicit drugs in Australia,” he said.

“People should be aware [that] our highly skilled officers are equipped with the latest tools and technology to stop criminals who attempt to import illicit substances.”