SPECIAL FEATURE: Based at Faslane are Britain’s nuclear armed Trident submarines while at nearby Coulport a mind boggling 220 nuclear weapons are stored inside a mountain. Protesters have been keeping watch for 35 years and counting.

Faslane indicated by the blue pin.

I wonder how many Australians and indeed Brits know about Faslane in Scotland and its significance.

The village of Garelochhead lies, as the name suggests, at the head of the Gare Loch. This is a Scottish `sea loch` that extends north from the Clyde Estuary into the southern flank of the Scottish Highlands. The railway reached here in 1894, en route from Glasgow to Crianlarich and Fort William.

Just a couple of miles south from Garelochhead lays the Royal Naval base of Faslane. It is here that Britain’s four nuclear armed submarines – HMS Vanguard, HMS Victorious, HMS Vengeance and HMS Vigilant (one is always on patrol) – are based while at nearby Coulport a mind boggling 220 nuclear weapons are stored inside a mountain.

The story of this picturesque village took a dramatic turn during the Second World War. A naval facility was established on the east shore of the Loch at Faslane. Today’s Faslane is an enormous naval base protected by a seemingly endless stretch of razor wire along the shore of the loch and it takes ages to drive past it. This massive barrier is primarily intended to keep out anti-nuclear protesters as much as to safeguard against conventional threats.

Remember how the leaders of the western powers told us in 2003 that Iraq had Weapons of Mass Destruction which were a real danger and could be deployed in 45 minutes?

Perhaps the weapons inspectors who turned Iraq upside-down looking for WMD in the months before the unprovoked attack of 2003 would have been better employed searching the bases at Faslane and Coulport which are both less than an hour’s drive from Glasgow in Scotland.

Boom for billionaires as poor suffer most in pandemic

Yes, Britain’s ‘deterrent’ Trident nuclear submarines are housed in Scotland. The 220 nuclear warheads are stored in the RNAB (Royal Navy Armaments Base) in Coulport on Loch Long, an inlet of the Firth of Clyde which is about four miles overland from Faslane, 30 miles from Glasgow, which is where the submarines are based.

The 220 nuclear weapons kept there, despite the opposition of the majority of the Scottish people, each possess the destructive power of many Hiroshimas.

Also see: Castles, lochs, guns and whisky… It’s got to be Scotland

The cost of this `deterrent` runs in to many billions – some estimates are as high as £220 billion (AUD$365 billion). The Cold War ended over twenty years ago so who or what is this grisly doomsday machine aimed at? China? Putin’s Russia? Some terrorist enemy? North Korea?

The huge Scottish opposition to Trident is embodied by the Faslane Peace Camp which is located a mile or so from the base and has been operating continuously since 1982. I have visited the peace camp many times and on my most recent trip I learned of the Australians who have spent time at the camp.

One of the dedicated peace campers who I’ll call Steve said: “We live very simply, cut wood for the stove to keep warm and boil water and cook. Scotland is against nuclear weapons.”

I asked: “Do you get many Aussie visitors?” The answer was that there have been visitors from all over the world, from France, the USA, Germany, The Netherlands, Spain, Greece, Canada, New Zealand and of course Australia.

Visitors to the camp are always welcome unlike at the heavily guarded nuclear facility which is patrolled 24/7 by not very friendly MOD police. A young Australian hitch hiker who came to spend one night was so fascinated by the camp and what it stood for that he stayed for 2 months.

The military police drive past the camp every 15 minutes to check on how many caravans are there.  There is a restriction of 13 caravans – there are currently about 11.  Foundations are not allowed – temporary structures only are permitted, like a wood stove and a communal space, kitchen and so on.

Life is austere in the camp for the current complement of 15 activists, especially in winter, though supporters bring donations of food and warm clothing.

When I was staying at a B&B in the nearby town of Garelochhead, I got talking to a construction worker who had a very hostile attitude to the peace camp and what it represents. He said he thought the camp should be bulldozed and he called the campaigners `freeloaders`. His idea of `construction` seemed to be `destruction`.

What do ordinary people think about the Trident nuclear programme? Polls show that a majority of the British population are against nuclear weapons.

According to a 2016 poll, 68% of Labour members oppose a Trident modernising replacement, with only 18% in favour.

A poll by Bristol University showed that nuclear weapons only made 3% of people feel safe.

Following the election of Jeremy Corbyn as British Labour party leader in September 2015, a Labour List Poll showed 53% of the party’s members want to get rid of Trident. Only 19% supported a new nuclear weapons system.

A Survation poll in January 2015 showed 47.2% of Scottish people opposing a new generation of nuclear weapons being based on the Clyde, with 31.6% in favour. 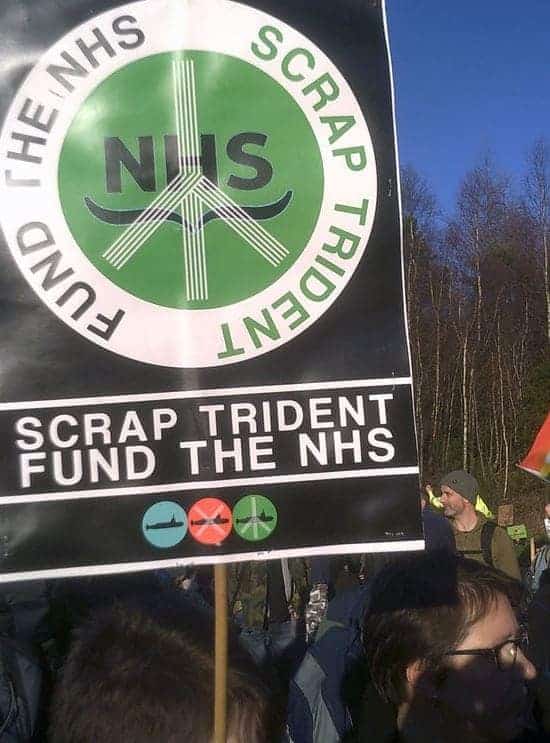 79% of respondents to a Guardian poll in April 2014 did not think the UK should replace Trident.

In a February 2014 ComRes poll, 65% said they would feel uncomfortable living near a nuclear weapons base and 64% think there should be an international convention banning nuclear weapons.

The vast cost of the Trident programme could pay for hundreds of thousands of new homes and fund the NHS (National Health Service) by training many thousands of badly needed nurses along with new teachers.

Yet despite the opposition of the majority of ordinary Scots, as exemplified by the 35-year long peace camp, the WMDs remain – is this democracy?

Have you been considering compatible ink for a while but don’t know whether it is a better alternative to genuine...

Alejandro Betancourt is one of Venezuela's leading entrepreneurs, representing the country on the global stage in business. But who exactly...

The Deaf Society and Deaf Services reports enrolments in Auslan courses have risen by more than 400% since the pandemic...

Australia Day used to be an obvious and uncontroversial occasion for brands to endear themselves to Australian consumers. No longer.