Fugitive US intelligence leaker Edward Snowden has claimed “the law is winning” after being granted a year’s asylum by Russia, accompanied by WikiLeaks legal adviser Sarah Harrison. 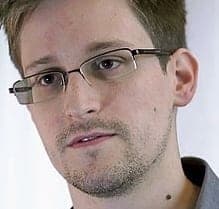 FUGITIVE US intelligence leaker Edward Snowden has claimed “the law is winning” after being granted a year’s asylum by Russia.

Snowden slipped out of Moscow’s Sheremetyevo airport in a cloak-and-dagger operation overseen by his Russian lawyer but unnoticed by the hordes of media trying to follow his every move.

“Over the past eight weeks we have seen the Obama administration show no respect for international or domestic law but in the end the law is winning,” the 30-year-old said in a statement issued by WikiLeaks on Thursday.

“I thank the Russian Federation for granting me asylum in accordance with its laws and international obligations.”

WikiLeaks said Snowden had left Sheremetyevo airport with the organisation’s legal adviser Sarah Harrison who has accompanied the American during his 39 day stay in the transit zone.

“They departed from the airport together in a taxi and are headed to a secure, confidential place,” WikiLeaks said.

The secret-leaking website’s founder, Julian Assange, said Russia’s action was a victory in the fight against US President Barack Obama’s war on whistleblowers.

“This battle has been won, but the war continues,” the Australian said in a statement from the Ecuadorean embassy in London.

“The US can no longer continue the surveillance of world citizens and its digital colonisation of sovereign nations.

“The public will no longer stand for it.”

Assange said whistleblowers would continue to appear “until the government abides by its own laws and rhetoric”.

Venezuela, Bolivia and Nicaragua previously indicated they would be open to offering Snowden safe haven but he couldn’t leave Sheremetyevo airport because the US government cancelled his passport.

WikiLeaks on Thursday commended Russia for accepting Snowden’s asylum request and supporting him “when many countries felt so compromised by US threats that they could not”.

The organisation said the US had made direct political and economic threats against the 20-odd countries Snowden had requested assistance from.

“We will continue to defend Mr Snowden and urge the United States government to respect its constitution and international law,” WikiLeaks said.

The whistleblowing organisation funded Snowden’s 23 June exit from Hong Kong to Moscow paying for his flight, accommodation and legal fees.

“He has just been given a certificate that he has been awarded temporary asylum in Russia for one year,” the lawyer said.

A spokeswoman for Sheremetyevo confirmed he had left the airport after 2pm on Thursday (2000 AEST).

A grainy still image published by Rossiya 24 television showed a man with a rucksack – apparently Snowden – about to get into a car outside the airport.

Mr Kucherena, who held several meetings with Snowden and helped him make his asylum application, said his new place of residence would be kept secret for security reasons.

“His location is not being made public for security reasons since he is the most pursued man on the planet. He himself will decide where he will go.”

Snowden is wanted on felony charges by the US after leaking details of vast US surveillance programmes but Russia has refused to extradite him. – AAP