Disposing of dead bodies is not typical dinner time conversation, but when your guest is one of Australia’s most notorious criminals, it’s best just to shut up and smile. Best-selling author LANA PENROSE can attest to that, when she shared a meal with the late Mark ‘Chopper’ Read. 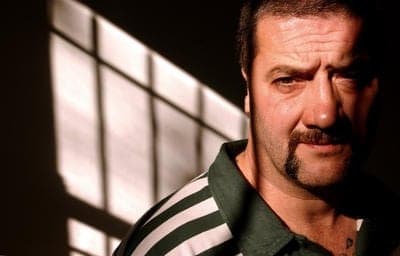 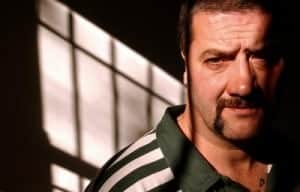 WHEN an old friend asked to meet for a meal a couple of years back, I was more than happy to oblige. He happened to be visiting Sydney with none other than Mark ‘Chopper’ Read, one of modern Australia’s most notorious underworld criminals, extortionists and stand-over men who’d served decades in prison, claimed to have been involved in 19-odd murders, and hacked off his own ears.

My friend was managing Chopper’s writing career, and the two were in town to promote Read’s most recent offering — one that I was assured was not sacrificial. For my buddy and I it had been a long time between drinks, but not long enough for me to accept his invitation at first blush.

“Will Chopper be there?”

Arrangements were made and I was shortly thereafter at Una’s in Darlinghurst, an understated restaurant boasting large portions of hearty German fare. I patiently slurped on a drink until my pal came bounding in. It was so good to see him after all this time. But lumbering behind him was a paunchy, shadowy figure; an older moustachioed shark-eyed gentleman. Holy Christ. He’d arrived with Chopper Read. There he was, staring right through me!

Hasty introductions ensued, which sent me into a tailspin propelled by a moral dilemma. ‘Pleased to meet you’ followed by a brisk handshake suddenly seemed so wildly inappropriate. Was it right to remain in the company of a kidnapper, arsonist, perpetrator of assault and alleged multiple murderer? Somewhat shell shocked, I shoehorned myself into a seat around a tiny table and covertly examined people’s reactions to the slouched man dining in their midst. Yes, ladies and gentleman — it’s him, Chopper Read, ingesting food before your very eyes! I noted the ogling, the sly smiles and the clandestine photographs snapped by smartphone.

Meanwhile, Chopper gruffly responded to my inane banter. Weather. Sydney versus Melbourne. Writing. Um . . . sport? As I burst a capillary, I couldn’t help but notice Chopper was making zero eye contact with me, and I wasn’t sure whether to be pleased or offended. It was a type of shyness, my mate would later tell me, because Chopper didn’t know me. Chopper Read . . . wary . . . of me. Made perfect sense.

In any event, Chopper eventually began describing, in graphic detail, a variety of underworld figures he’d either associated with, screwed over or killed. While looking exclusively at my friend, he described to ‘me’ how an acquaintance had wrapped an almost dead man in a garbage bag, taped it up and asked Chopper to help him dispose of the body. He also described how he’d fed either that body or the body of another (I wasn’t sure which) through an industrial-sized wood shredder, followed by a variety of trees, kangaroos and domestic animals, the leafy-intestinal combo ultimately being pumped into the Murray River.

Now I should point out I am anti-violence in every way. I’m all for love, peace and puppies. In fact I’m so passive, most people fail to realise I exist. I’m also one of the few people in this country who refused to jump on the Underbelly bandwagon. So as he spouted off names of presumable underworld figures or murder victims, I wondered if I was being fed information which would lead to me being forced to appear in a witness stand at a criminal trial. And as Chopper disclosed yet more gruesome details of severed toes and the like, I watched his dull fork stab at his schnitzel and listened to his knife scrape along his plate, which I felt all the way to my back teeth. It was the weirdest dinner of all time.

Not wishing to offend, I stuck around after our meal and we proceeded to the Victoria Rooms where I witnessed people at first pretend not to notice Chopper Read simultaneous to sheer delight dawning on their faces. Some gravitated towards him like moths to a flame. A hot blonde in a pair of skyscraper heels and her boyfriend strode past several times, staring uncontrollably, until Chopper called them over.

After a quick exchange, the blonde bashfully asked if she could sit on Uncle Chop Chop’s knee and have her photo taken with him — as though she’d just spotted Santa Claus and Santa Claus was real — hooray! Others plonked themselves down at our couch and chatted animatedly with all-consuming smiles.

Eventually people drifted away. And as I tore my gaze from Chopper’s mangled ear to his sullied silver teeth, my friend announced he had to go to the bathroom. Every cell within me protested: ‘Noooooo!’ Notwithstanding, Read and I were suddenly alone — just the two of us, side by side, on a red plush lounge in a sultry inner-city bar. I decided now would either be a great time to (a) run, never to be seen again, or (b) begin questioning my acquaintance about intricate details concerning his childhood. I chose the latter, and this is where things got really interesting.

Chopper became more open, even daring to look at me square on. He told me his father — a former soldier who’d served a tour of duty with the Australian Army — had discussed killing and maiming without censorship to a very young and impressionable boy who would later be known as Mark ‘Chopper’ Read. His father had shown him how to fire a gun from as early as he could remember and they carried out target practice often. Chopper’s dad had also explained how certain nationalities were less than others.

Chopper then went on to discuss his mother, a religious woman who, rather than look at things from a broader perspective, presumed her son to be possessed by Satan. He was sent to various children’s homes and committed to mental institutions by his early teens. It seemed young Chopper was not given life’s greatest start.

He opened up further, painting a stark picture pertaining to an incident while he’d been incarcerated within a sanatorium. He said he’d been assigned bathroom-cleaning duty, which he carried out to the very best of his ability, day after day, to the point of obsession. During this time, he befriended an Italian man and fellow inmate – noteworthy as it seemed Chopper didn’t make friends very easily. Sadly, this man went on to take his own life in the very bathroom Read had been charged with. He told me with deep sincerity he scrubbed that bathroom right after the incident regardless — even more meticulously — scraping his friend’s ruby red blood and other bodily remnants from the tile grout until the whole room sparkled once again.

According to Chopper, the resident psychologist of this facility took this action as definite confirmation of Read’s serious mental illness and commenced electro shock treatment shortly thereafter, which had no effect on him whatsoever. It has since been suggested he suffered Obsessive Compulsive Disorder and Aspergers Syndrome.

As Chopper divulged such things, I felt that he came closer to ‘accepting’ me. He didn’t extend affection as such. Nor was he in any way sleazy. If anything, he was simply Chopper parroting the story of his life without fanfare or emotion, and allowing me to listen.

Occasionally he’d laugh gregariously, or say something so politically incorrect that I’ve wiped it from my memory banks. But he also revealed a softer side, reserved only for his sons and wife, Margaret. He described to me how upset she’d been that Chopper the movie starring Eric Bana had included scenes of domestic violence, which he claimed never happened in reality.

As the night drew to a close, the three of us soon milled outside on the footpath. As a bouncer pumped Chopper’s hand and slapped him on the back, my friend asked if I’d like just one more drink elsewhere, which I declined. As far as I was concerned, there’d already been more than enough excitement for one night. But the PiÃ¨ce de résistance came when I hailed a taxi; it was then that Chopper cried, “Aw, come on, love! We’re not gonna try and root ya!” The last words I’d ever hear from Chopper Read.