Morrison government courts controversy on Jerusalem ahead of Wentworth byelection

Scott Morrison and foreign affairs minister Marise Payne made a series of major announcements in relation to Israel at a Tuesday news conference. 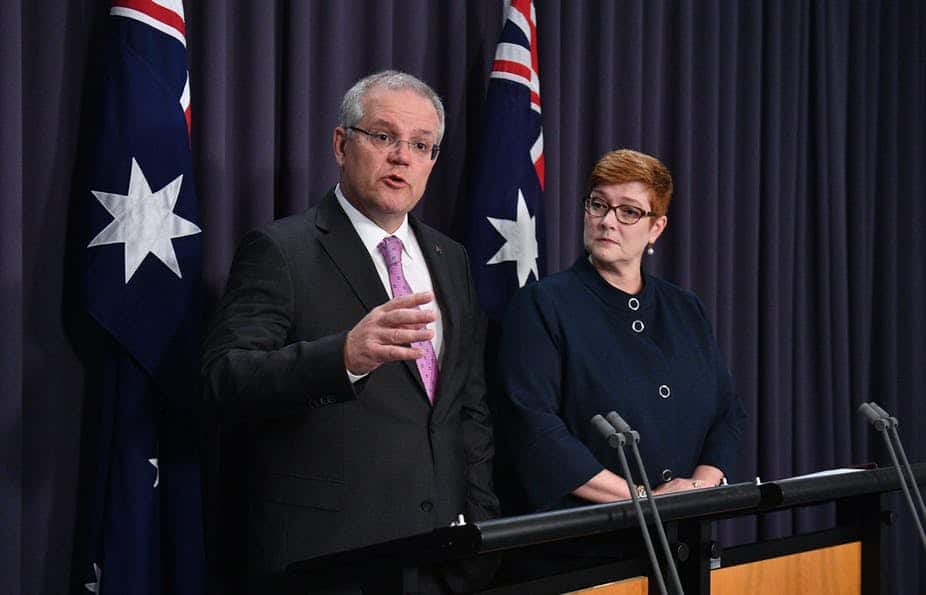 Scott Morrison has announced Australia will consider recognising Jerusalem as Israel’s capital and relocating its embassy there – in a move immediately seen in the context of Saturday’s byelection in Wentworth, which has a large Jewish population.

While denying he was motivated by Wentworth, Morrison said the Liberals’ candidate Dave Sharma, a former ambassador to Israel, had set out a way this could be done while maintaining Australia’s support for a two-state solution in the Middle East.

I spoke today with Australian PM @ScottMorrisonMP. He informed me that he is considering officially recognizing Jerusalem as the capital of Israel & moving the Australian embassy to Jerusalem. I’m very thankful to him for this. We will continue to strengthen ties between ?? & ??!

In a series of major announcements in relation to the Middle East Morrison told a Tuesday news conference:

The government will announce the results of its review of its Middle East policy by December.

In decisions hugely controversial internationally, President Donald Trump last year announced he would move the United States embassy from Tel Aviv to Jerusalem, and he has abandoned the Iranian deal.

The Liberals have been making a big pitch for the Jewish vote in Wentworth, on the back of Sharma’s diplomatic experience. His major opponent, independent Kerryn Phelps, is Jewish.

In a May article, Sharma wrote of the US embassy move: “Now that the United States has broken the taboo, as a pragmatic and solution-oriented nation Australia should be prepared to lend our support to this common-sense proposition.

But in June, Morrison said of such a proposal: “It’s never been under review and we’re not doing it.” On Tuesday he explained his change by saying that then he was treasurer, articulating the government’s policy “as it existed at the time”.

Labor was scathing about the announcement.

Shadow foreign minister Penny Wong said that “today we see just how desperate Scott Morrison is … to hold on to the seat of Wentworth.

“Floating a change in Liberal foreign policy … just to try to hold on to the seat of Wentworth. And does anyone actually believe he’ll carry this through? He is just posturing ahead of a byelection that he is desperate to win in order to hold on to a slim majority.”

“But this is a bloke who is prepared to do and say anything to hold on to his parliamentary majority.”

Wong said Labor continued “to hold the long-standing position – as do the vast majority of the international community, and as did Mr Downer, Ms Bishop, Mr Turnbull and Mr Morrison until the day before yesterday – that the appropriate thing to do is to ensure the status of Jerusalem is part of any discussion in the peace process, and that until that is resolved the embassy should remain in Tel Aviv.”

But Primrose Riordan from The Australian tweeted “the Palestinian delegation to Australia says 15 Middle Eastern embassies are likely to hold an emergency meeting today to discuss PM Morrison’s comments on Jerusalem.”

On another front, the government has been forced into an about-face on its extraordinary support on Monday for Pauline Hanson’s (unsuccessful) motion declaring “It’s OK to be white”.

On Tuesday the government was in full retreat, saying Coalition senators had voted for the motion due to an administrative mistake.

Senate leader Mathias Cormann told a news conference the government in September had decided to oppose the motion. “That is a decision that should have been maintained yesterday and as a result of an administrative process failure it wasn’t. That is regrettable and I take responsibility.”

Attorney-General Christian Porter blamed his own office. He said in a statement: “An early email advising an approach on the motion went out from my office on this matter without my knowledge.

“It appears that, of the very large number of motions on which my office’s views are routinely sought, this one was not escalated to me because it was interpreted in my office as a motion opposing racism. The associations of the language were not picked up. Had it been raised directly with me those issues would have been identified.

Pauline Hanson tweeted: “Looks like Scott Morrison is suffering from a bad case of it’s okay to be white guilt.”