Prime Minister Scott Morrison laying out economic policies “to get Australians off the economic sidelines and on the field again”. 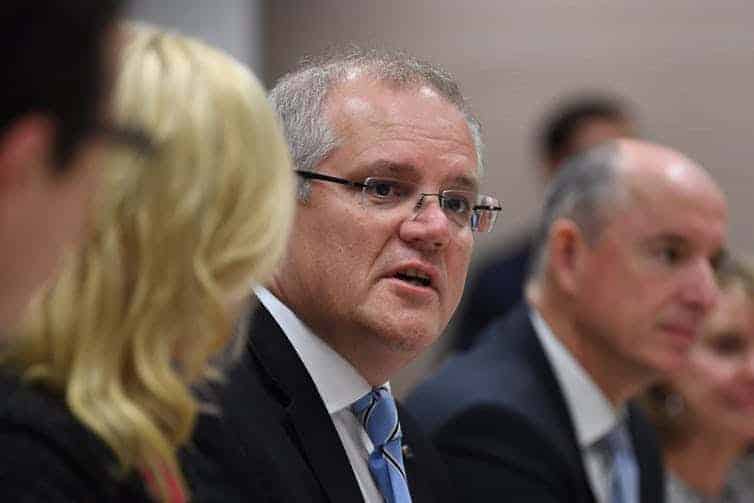 Scott Morrison will commit to getting consumers, business and investors “off the economic sidelines and on the field again” in his first major domestic speech of the new term.

Addressing a business audience in Perth on Monday, Morrison will set out the government’s economic priorities for the next few months, including delivering its tax plan when the new parliament meets, and “provoking the ‘animal spirits’” in the economy by removing regulatory and bureaucratic barriers to investment.

He will also foreshadow a new look at industrial relations reform while stressing that it must benefit both employers and employees.

Acknowledging the challenges and headwinds affecting the Australian economy, which registered low growth in the latest national accounts, Morrison will say political uncertainty in the election run up weighed on the confidence of consumers, businesses and investors. This saw them “sitting on the sidelines” until it was over.

“Our job post election is now very clear – to get Australians off the economic sidelines and on the field again.”

With shadow cabinet on Monday discussing the opposition’s position on the Coalition’s three-stage decade-long tax package, Morrison will seek to increase pressure on Labor to pass all stages, saying the plan doesn’t just have a strong political mandate but also “a compelling policy rationale”.

The first stage will boost consumption and be equivalent to at least two 25 basis point interest rate cuts, he says in his speech, released ahead of delivery.

Labor agrees with stage one but is yet to decide whether it will wave through the second and third stages, both due to start after the next election. It has been particularly critical of stage three, which delivers to the highest income earners. The government says it won’t split the bill, which will be introduced when the new parliament begins next week.

While some in Labor believe it should pass the whole package, others argue it is irresponsible to commit to tax cuts years out in uncertain times.

Shadow treasurer Jim Chalmers, interviewed on the ABC, reiterated on Sunday that Labor wanted to know how the third stage – worth $95 billion of the $158 billion package – was distributed through the various tax brackets. He said Labor’s highest priority was to get the first stage flowing through the economy, while the government’s highest priority seemed the third stage which didn’t come in for another five years.

But Morrison says in his speech: “It still baffles me why Labor can readily sign up to spending schemes that run for decades, yet cannot do the same to let Australians keep more of their own money.

“Under our changes, from 2024-25, 94% of Australians will pay a maximum marginal tax rate of no more than 30 cents in the dollar, compared to only 16% if stages two and three are not delivered.

“Or to put it another way, almost 80% of hard working Australians will keep more of what they earn following stages two and three of our tax plan.”

Morrison says that to provoke the “animal spirits” in the economy, regulatory and bureaucratic barriers to business investment must be removed.

This requires “reducing regulatory barriers to growth and driving improvements in industrial relations that improve outcomes for both workers and businesses”.

“Congestion is not just on our roads and in our cities. We also need to bust regulatory congestion, removing obstacles to business investment,” he says, instancing the experience of the mining industry in Western Australia.

“In 1966, the late Sir Arvi Parbo took the Kambalda nickel mine near Kalgoorlie from discovery to operation in 18 months. By contrast, the Roy Hill iron ore mine took around 10 years to complete around 4,000 approvals. Delays to the project meant delays to over 5,000 construction jobs and 2,000 ongoing jobs.

“There is a clear need to improve approvals timeframes and reduce regulatory costs, but in many cases regulators are making things worse.

“Look at the WA Environment Protection Authority and the uncertainty it has created over new emissions requirements for the resources sector. Business will also make valid criticisms of many Commonwealth agencies and departments.”

Morrison is appointing his close confidant Ben Morton, from WA, who is Assistant Minister to the Prime Minister, to work with him, Treasurer Josh Frydenberg and other ministers “to tackle the full suite of barriers to investment in key industries and activities”.

The government will focus on regulatory reform “from the perspective of a business looking, say, to open a mine, commercialise a new biomedical innovation, or even start a home-based, family business.

“By focusing on regulation from the viewpoint of business, we will identify the regulations and bureaucratic processes that impose the largest costs on key sectors of the economy and the biggest hurdles to letting those investments flow.

“What are the barriers, blockages and bottlenecks? How do we get things moving?

“Step one is to get a picture of the regulatory anatomies that apply to key sectoral investments. Step two is to identify the blockages. Step three is to remove them, like cholesterol in the arteries.”

Morrison will highlight the need “to protect investment from the impact of militant unions” and reaffirm that the government plans to try to get through the new parliament its Ensuring Integrity bill, that stalled in the last term. This would strengthen its hand against militant unions, notably the CFMMEU.

Beyond this, Morrison will say he has asked the new Minister for Industrial Relations, Christian Porter “to take a fresh look at how the system is operating and where there may be impediments to shared gains for employers and employees.

“Any changes in this area must be evidence-based, protect the rights and entitlements of workers and have clear gains for the economy and for working Australians.”