A former Manus Island processing centre guard says he knew there would be bloodshed within a week of arriving on the island. 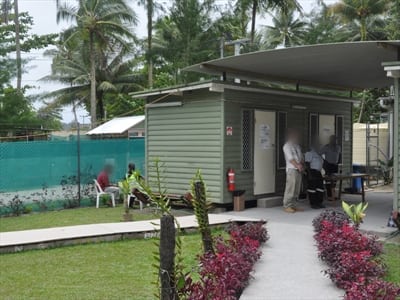 A former guard at the Manus Island detention centre says he knew within a week of arriving that there would be bloodshed.

He was proved correct over two nights in February when tensions boiled over, allegedly sparked after the asylum seekers were told, against advice from Manus centre managers, they would all be resettled in PNG.

“I made comments to my wife and people that I know that there is only one possible outcome here and that is bloodshed,” he said.

That erupted on February 16, after the announcement about resettlement.

A group of asylum seekers ran out the front gates where they were beaten by guards, Mr Kilburn said.

Others inside responded with rocks.

The disturbance was quelled by the Incident Response Team, a riot squad comprising foreign and PNG employees of centre management firm G4S.

The ABC said the violence erupted again the following night with a group of asylum seekers chanting derogatory terms towards PNG.

As the rioting escalated, G4S handed over to PNG police who entered the compound firing shotguns and automatic weapons in the air, according to other guards who were not named in the news report.

They were followed by a group of PNG nationals, some apparently local G4S employees.

In the ensuing violence 62 asylum seekers were injured, with 23-year-old Iranian Kurd Reza Barati beaten to death in an accommodation block.

No-one has been charged with his murder.

But the ABC said asylum seekers and some guards pin much of the blame for the violence on the PNG locals.

Mr Kilburn said it could have been much worse.

“We couldn’t guarantee the safety of those people and we still can’t,” he said.

Refugee activists protested outside the Star Event Centre in Sydney where Prime Minister Tony Abbott was speaking on Monday night, demanding that Manus and Nauru be closed. – AAP