OPINION | In the wake of yet another racist incident in Australia involving Eddie McGuire and Adam Goodes, PAUL BLEAKLEY asks, is our jokey larrikinism masking a serious cultural problem of casual racism? 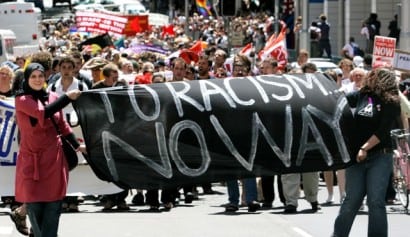 WELCOME to Who Wants To Be A Millionaire? and, playing for a prize of one million dollars, we have Eddie Maguire from Collingwood. Eddie, the question is this: what is the best way to refer to Sydney Swans player Adam Goodes? Is it a) four-time all Australian player, b) dual Brownlow medallist,  c) co-Chair of the Goodes O’Loughlin Foundation to empower Indigenous role models, or d) King Kong. Would you like to use a lifeline?

The controversy that has engulfed Collingwood president and former Channel 9 CEO Eddie Maguire in the last week has been perceived in a number of ways within the Australian public. Some in the community are utterly disgusted by Maguire’s careless quip, while others have thrown their undying support behind his right to free speech. Most concerning, however, is the collective shrug of the shoulders that has been the response of most Australians.

Why is there such apathy towards racism in Australian society? For a topic that is generally taboo in developed nations around the world, Australia has always had a somewhat lax approach to racial issues. Racial epithets slip from the mouths of many Australians like butter, from pre-teens to the elderly. We may claim to be a social progressive nation, however it is hard to have faith in the future when the word ‘Jew’ is a synonym for “cheap” or “cheater” in playgrounds across the country.

Australians that have lived in London, or travelled the world, know full well that we have a quite unique manner of communicating with each other. We have taken a firm stance against the evils of political correctness, blatantly flaunting our outrageousness in protest against the societal conventions that restrain our freedom of expression. If you can’t take a joke, stuff you because that is just the way it is in ‘straya.

Perhaps it is this jokey-approach to serious issues that has led Australia down the path of casual racism. It is easy to hide the prejudicial venom that seeps from the mouths of the ignorant with a quick “just kidding, no need to get worked up over it.” The longer the joke goes on, however, the more ingrained in the Australian lexicon it becomes. Try telling a 14-year-old not to call hip hop music “n***** beats” because it is racist when that is what their friends call it, and they have never been told it’s wrong.

The normalisation of casual racism in Australian culture is not a recent fad. Here’s a little known fact: my last name should not even be Bleakley. My great-grandmother changed her children’s name from the far more exotic ‘Piffero’ when they were young after they repeatedly came home from school having been bullied for being ‘wogs’ and ‘dagos’. These days the word ‘wog’ is a term that is commonly used throughout Australia, usually self-referentially by members of the Greek and Italian community themselves. If Nick Giannopoulos can call himself ‘the Wog Boy’ why can’t we?

Ethnic communities have always gone through a cycle in Australia. First it was the Irish, then the ‘wogs’. After that came the Vietnamese, and later the Lebanese. Each time a fresh wave of immigrants reach our shores, fleeing conflict and despotism, we put them through a hazing ritual of name-calling and suspicion. Until the next group of ethnics come in, of course… That is when ‘wog’ becomes a term of endearment because, after all, they are better than the Vietnamese, right?

I was in a hostel room recently, chatting to an Italian girl that was complaining that it was difficult for her to come to Australia on a temporary working visa. Another Australian in the room piped up, saying that we would prefer more Europeans to be able to come to Australia because it was better than being swamped by Asians. It wasn’t said with malice, or anger. It was said in a matter-of-fact way, as if educating a foreigner about the demographic make-up of our country while unwittingly parroting a seventeen year-old quote from Pauline Hanson.

The truth is that Australia has not changed. We may go on and on about being the ‘lucky country’ and a progressive nation, but the fact is that the country has become increasingly conservative as the years have gone on. We can’t blame politics either: the last six years under a left-wing Labor government have done precious little to change the mentality of average Australians. No, this is a trend that is occurring organically within the population itself. It is a trend where a racial jab is passed off as a joke. If they take offence? Not our problem, they shouldn’t be so soft.

I was in Australia recently, and was coming home on a bus from a night out in Surfers Paradise. A group of men got on the bus — all of whom were around 50-years-old and of Middle Eastern appearance. They chatted amongst themselves in their native language for a few minutes before a drunken bogan began to berate them for not speaking ‘Australian’. In an attempt to respond to the relentless barrage of insults, one of the men mustered up the courage to call out that “Australian is a free country, it is democratic.”

It is a sad day for ‘the lucky country’ when we have to be reminded by visitors from other countries that we were founded on the principles of equality and a ‘fair go’. In that moment, I have never been so ashamed to be an Australian.