Kevin Rudd will stand for leadership ballot against Julia Gillard

Kevin Rudd says he will challenge Julia Gillard for the leadership of the Labor Party at a special caucus meeting at 7pm (10am UK time). 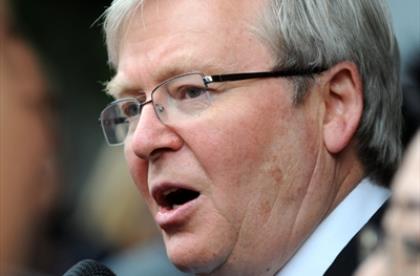 KEVIN RUDD Rudd says he will challenge Prime Minister Julia Gillard for the leadership at a special caucus meeting at 7pm (10am UK time) today.

“I will be a candidate,” Mr Rudd told reporters.

“Many, many MPs have requested me for a long, long time to contest the leadership of the party because the parlous circumstances we now face,” Mr Rudd said.

He said a petition had been circulating calling a special meeting of caucus to resolve the leadership issue, but Ms Gillard’s statement earlier on Wednesday overshadowed this.

Mr Rudd said if he loses the ballot, he will retire from politics at the next election. He thanked Ms Gillard for making the same commitment.

He said he believed it was “for the nation’s sake” that the Labor leadership issue should be resolved now.

He said tens of thousands of members of the Australian public had been asking him to do it for a long time.

“It is your voices, the voices of the Australian people, it is those voices that have had a huge effect on me, more so than most of the voices I happen to hear around the corridors of this building.”

He said thousands of Australians had told him they were “genuinely fearful” of what might happen if Opposition Leader Tony Abbott won government in September.

Mr Rudd said Australians of all political persuasions wanted a choice at the federal election and they currently didn’t have one.

“At present, if you talk to them long and hard, they don’t feel as if they’ve got one, and they’re frustrated that we are denying them one,” he said. – AAP