BBC radio presenter suggests Australia is ‘effectively operating a sort of Guantanamo Bay ... only in some ways even worse’ 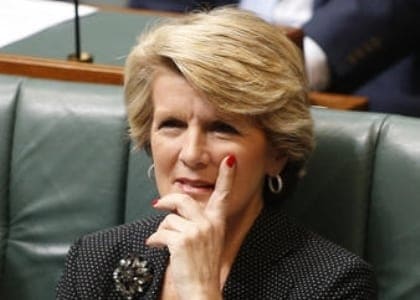 Julie Bishop has faced accusations that Australia’s treatment of asylum seekers is “inhumane” and “uncivilised” during a hostile BBC interview in London.

The foreign minister is in Britain for the annual meeting with her counterpart, William Hague, and the defence ministers of both countries.

On Tuesday morning UK time, BBC Radio 4’s John Humphrys questioned her about Canberra’s “inhumane” detention centres on Nauru and in Papua New Guinea. The presenter noted the centres had been described as having the look and feel of concentration camps and suggested Australia was “effectively operating a sort of Guantanamo Bay … only in some ways even worse”.

Julie Bishop defended Australia’s policy, saying the federal government had taken a “tough line” to deter people from making the journey by sea with consequent drownings.

“Our aim is to dismantle the people-smuggling trade that flourished in South East Asia,” the foreign minister told BBC radio. “We’ve done this before and it worked.”

Bishop said people in detention centres were treated with respect and dignity and given healthcare and schooling. On Manus Island the standard of accommodation and support people received “in many instances is better than that received by the people of Papua New Guinea”, she said.

A Senate inquiry has been established into the violence on Manus Island that led to the death of an Iranian asylum seeker, Reza Barati, in mid-February.

Humphrys asked Bishop: “Why can’t you have these detention centres in Australia?” Of the the offshore camps he said: “That’s not a very civilised way of going about it.”

He then asked Bishop about the death on Manus Island. “Yes, well 1,200 people have died on boats trying to get to [Australia],” she replied, before the radio host interrupted to ask if that justified the PNG death.

“No I didn’t say it justified it at all, I just said we are trying to stop people coming by boat,” Bishop said. “This is what happens in unruly behaviour when violence occurs — and it’s tragic.”

Immigration is a hot issue in Britain, with the anti-immigration party Ukip gaining popularity on the back of concerns about a potential influx of Bulgarian and Romanian nationals.

The ruling Conservative party has also increasingly appealed to voters’ perceived prejudices on immigration since the Australian strategist Lynton Crosby was put in charge of the Tory election campaign. – AAP