Jimmy Barnes and John Farnham have made it clear they do not support Reclaim Australia's use of their songs.

John Farnham and his manager Glenn Wheatley have strongly attacked the organisers of the racist activist group Reclaim Australia, calling their use of iconic songs including Farnham’s You’re The Voice “disgusting”. Reclaim Australia is an Australian right wing movement. In April and July 2015 it organised anti-Islam rallies in several Australian cities. Speakers at these rallies included Danny Nalliah, Pauline Hanson, and George Christensen. Reclaim Australia has said that the rallies are a “public response to Islamic extremism and a protest against minority groups who want to change the Australian cultural identity.”

Reclaim Australia has played a number of Australian patriotic songs at its rallies, but prominent singers including Jimmy Barnes (“Khe Sanh”) and John Schumann (“I Was Only 19″) have requested that their songs not be played at these rallies.  Farnham’s signature song ”Your’e the Voice” was awarded the 1987 ARIA Award for “Single of the Year”. The song was one of the biggest hits of 1986 in Australia, topping the Kent Music Report Singles Chart for seven weeks from 3 November to 21 December and is Farnham’s biggest international successes, reaching the top 10 in the UK.

“I have successfully pulled down the use of You’re the Voice from Youtube that these guys have been using,” Wheatley said in a statement. “The use was disgusting as it showed the decapitation of those poor souls who lost their lives.”

After Cold Chisel’s Jimmy Barnes demanded on his Facebook page that Reclaim Australia stop using his songs as he did not support their aims or their actions, “It has come to my attention that certain groups of people have been using my voice, my songs as their anthems at rallies.

“I only want to say the Australia I belong to and love is a tolerant Australia. A place that is open and giving. It is a place that embraces all sorts of different people, in fact it is made stronger by the diversity of its people. If you look at my family you can see we are a multicultural family. Australia needs to stand up for Love and Tolerance in these modern times.

“None of these people represent me and I do not support them,” wrote Barnes.

Wheatley and Farnham repeated the demand.

As the government drags its heels, a better model for a federal integrity commission has emerged

Finally at zero new cases, Victoria is on top of the world after unprecedented lockdown effort

“John and I are seriously opposed to the use of John’s song at the rallies. It no way reflects our support in any way,” said Wheatley.

In response Reclaim Australia posted a pic on their Facebook page challenging Farnham, “Once a voice of Australia now “You’re the Voice for Sharia Law?” 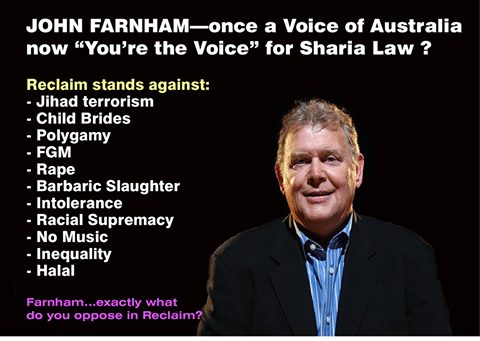