Indonesia has warned Australia over a series of breaches of its territorial waters and demanded the government stop turning boats back. 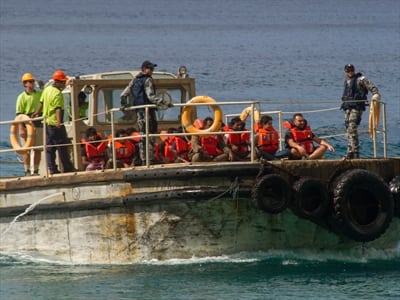 INDONESIA has demanded the Abbott government immediately suspend its policy of turning asylum seeker boats back after the Australian navy breached its territorial waters.

The Indonesian government say it deplores the breaches and its navy will also ramp up patrols in areas where the incidents occurred in what appears a serious decline in already fractured relations.

“The government of Indonesia deplores and rejects the violation of its sovereignty and territorial integrity by the Australian vessels,” the statement read.

“The government of Indonesia underlines that any of such violation of whatever basis constitutes a serious matter in bilateral relations of the two countries.

“Indonesia therefore demands that such violation will not recur in the future.

“The government of Indonesia has the right to protect its sovereignty and territorial integrity in accordance with international laws and the charter of the United Nations.

“Indonesia demands that such operation conducted by the Australian government that led to this incident to be suspended until formal clarification is received and assurances of no recurrence of such incidents has been provided.”

“While we take note such assurance that Australia fully respects Indonesia’s territorial sovereignty, Indonesia rejects the so-called `turn back boats’ policy and … any unilateral action which risks the recurrence of similar incidents in the future.”

The statement, which was released by the office of Indonesia’s Co-ordinating Minister for Politics, Security and Law, also demanded a more detailed explanation as to how Australian navy vessels had strayed into Indonesian waters.

The statement came after a spokesman for President Susilo Bambang Yudhoyono earlier suggested Indonesia was dissatisfied with Australia’s response to the incidents.

Teuku Faizasyah, the president’s spokesman on foreign affairs, confirmed to AAP that Dr Yudhoyono had been briefed on reports of the territorial incursions.

He said Dr Yudhoyono had also been made aware of Australia’s “expression of regret” in relation to the incidents.

Despite the government repeatedly promising to respect Indonesia’s territorial sovereignty, Mr Morrison on Friday admitted to a number of incursions by Australian vessels during Operation Sovereign Borders.

It is unclear whether the navy ships were turning back asylum seeker boats when they entered Indonesian waters.

“This was done unintentionally and without knowledge or sanction by the Australian government,” Mr Morrison said.

“The Australian government takes our shared commitment with Indonesia to mutually respect the sovereignty of each nation very, very seriously.”

An Indonesian spokesman warned the latest incident was likely to put further strain on relations between Jakarta and Canberra, already at their lowest point in more than a decade in the wake of last year’s spying row.

“If they entered Indonesian waters like that, this will only worsen the situation and the relationship between Indonesia and Australia,” Agus Barnas said.

A rapprochement between the countries following Jakarta’s decision late last year to freeze co-operation with Australia in the wake of the spying row is now in serious jeopardy.

Foreign Minister Julie Bishop apologised to her Indonesian counterpart Marty Natalegawa on Thursday, while Mr Morrison said a more formal apology will be provided to the Indonesian government via the Australian embassy in Indonesia.

Opposition Leader Bill Shorten says the government needs to stop blaming the navy and take responsibility for its own border protection policy.

“These service men and women do an extremely tough job under very difficult circumstances and they shouldn’t be blamed for the failings of the Abbott government and its policies,” Mr Shorten said.