Immigration Minister Scott Morrison is refusing to say if asylum seekers in offshore detention will be strip searched under enhanced security measures. 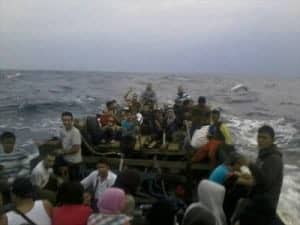 However, the minister would not say on Friday if the more than 1100 detainees at Lombrum naval base will specifically be forced to undergo strip searches.

“I’m not going to go into detail of the operations on how they might conduct searches, but I think that’s a fairly extreme example,” Mr Morrison said.

“At this stage we are in discussions on how these powers might be applied.

“The operational side of that is still being worked through.”

“Search powers enable to us to identify things that may be in possession of people in centres (and) if things escalate, can lead to very dangerous situations,” Mr Morrison said.

A preventative approach needed to be taken “before things get out of hand”, he said.

The minister referred to past riots at the Nauru detention centre, which resulted in property being destroyed, and said they could have been prevented if authorities had search powers.

Lieutenant General Campbell would not comment on reports Australian vessels had withdrawn from Indonesia’s search and rescue zone.

Mr Morrison also declined to speculate on comments by an Indonesian immigration official in the Jakarta Post earlier in the week that surveillance efforts aimed at stopping people smuggling would end.

Just one boat carrying asylum seekers has arrived in Australian waters in the past week.

The vessel intercepted on November 27 was carrying nine passengers and four crew. All were taken to Christmas Island for processing.

This brings the total number of boats arrivals for November to five, Lieutenant General Campbell said on Friday.

Lieutenant General Campbell warned asylum seekers not to get on boats to Australia before the monsoon season saying they would be “inviting” tragedy.

“The ocean is large, the boats are small, our assets are limited, and the weather dangerous,” he said.

Eleven cyclones are predicted in waters north of Australia this summer, along with large waves up to four metres.

Mr Morrison said he and Mr O’Neill discussed the establishment of a joint oversight committee for the centre.

The minister also took a pot-shot at Labor and warned the party against supporting an Australian Greens Senate motion to disallow temporary protection visas when parliament resumes on Monday.

“They remain double minded and divided on this and deferring to the Greens,” he said.

“They can’t hold a consistent position.”

Comment is being sought from the Opposition and Greens. -AAP