Playing the political game: how to become an Australian senator

A confusing name, a donkey vote and a complicated deal through the preference whisperer can help you become a senator no-one’s heard of. 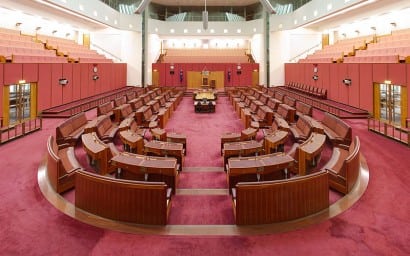 WANT a job that pays almost $200,000, with heaps of perks, and lasts six years? Here’s how, with a bit of luck and organisation, you can become a member of the Australian Senate.

To satisfy the Australian Electoral Commission, you’ll need a few objectives and rules to make your party look pukka and 500 members. Between family, neighbours and mates from work or the pub, that should be a breeze, though you shouldn’t include your cat unless it’s a registered voter.

Your party’s name can be important. It’s best to be confusing, putting Liberal or Labor in it so some mugs vote for you when they think they’re voting for one of the big boys. The AEC says your name shouldn’t be likely to be confused with an existing party, but the rule seems to be interpreted loosely.

Then hope for a good barrier draw, though the odds are always going to be against you. Being drawn first, on the top left corner of a voting paper swollen with a multitude of parties big, small and microscopic, gets you the donkey vote.

To see how a combination of duplicitous name and top of the draw helps, look at NSW. David Leyonhjelm of the Liberal Democrats harvested the votes of both the donkeys and some confused Liberal supporters to end up with 8.8 per cent of the primary vote. With preferences, that should be enough.

Preferences, they’re the real key; because you’ll be lucky to get 0.5 per cent of first votes.

Every party must lodge with the AEC its preference flows so that everyone who votes the so-called above the line (and only obsessives, Tasmanians and Canberrans vote below the line in any great numbers) cede control of the preferences to the wishes of the party they vote for first.

And if it’s one of the micro-parties, you can bet that preference dances about with no regard to ideological affinities, helping to eliminate candidate after candidate until finally helping to elect the last runner standing who, in some cases, no-one has heard of.

Getting the preference deals right – so that you pick up the votes of party after party as each is eliminated – is tricky but critical.

To help you is the “Preference Whisperer”, political consultant Glenn Druery who organised a minor party alliance full of complicated preference deals with the aim of getting one of them up in each state.

Whatever you think of his dark arts, he’s obviously a mathematical whiz. The Australian Sports Party in Western Australia and the Australian Motoring Enthusiast Party in Victoria look winners, and neither got 0.5 per cent of the primary vote.

Antony Green, the ABC’s election analyst, has said no other election system in the world could produce such an outcome.

“It would all be a bit of a joke, except that these senators have just been handed six-year terms in high paying and well-staffed Senate seats with significant powers over how the country is governed,” Green said.

The rise of the micros has been clear for a time, especially in Victoria. Steve Fielding of Family First in 2004 and John Madigan of the Democratic Labor Party in 2010, won seats off tiny primary votes.

The election post mortem by a parliamentary committee is bound to hear, and not for the first time, demands for reform.

There are several ideas.

One is to make it much harder, especially by greatly increasing the membership requirement, for parties to register in the first place. That’s not very democratic.

Another is to set a primary vote threshold, with four per cent the figure most mentioned. Parties would have to reach that before becoming part of the second, preference-allocating, stage of the count. That may well leave the Coalition, Labor, the Greens and perhaps a prominent independent like Nick Xenophon the only ones standing.

Most ideas, however, involve allowing preferences to be optional after the first six (or 12 in the case of a double dissolution). This could be applied either above or below the line, though probably not both.

In either case, preordained preference deals would end and voters would regain control of their votes.

Finally, and separately, the donkey vote could be nullified by adopting Tasmania’s Robson Rotation, in which the order that candidates appear on the ballot is rotated. Everyone has an equal turn at number one.

The parliamentary committee will have a Coalition majority and substantial Labor membership, so whatever changes it comes up with are bound to favour them.

When it comes to arranging matters to help them maintain their comfortable duopoly and keep lesser players, especially the Greens, out in the cold they both have form.

Finally, however bizarre a system that sends people with almost no support to the Senate may be, there’s no reason to think that they’ll make a lesser contribution than some of their big party colleagues whose abilities are not always apparent.

After all, many office holders in ancient Athens, the mother of democracy, were elected by lot.

Our Senate could perhaps be said to be elected by a guided, if not rigged, lottery. – AAP