How do I vote in the 2013 Australian election from the UK?

AUSTRALIAN ELECTION 2013 | Aussie expats in the UK will able to vote in the 2013 Australian election by using pre-polling facilities at the Australian High Commission or, if eligible, by submitting a postal vote. 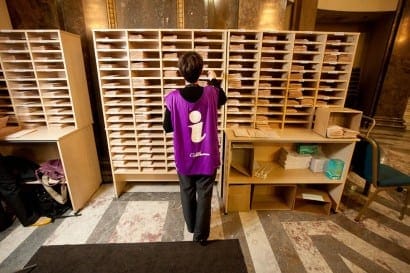 AUSTRALIANS in the UK will able to vote in the federal election by using pre-polling facilities at the Australian High Commission or, if eligible, by submitting a postal vote.

Australia House in London is the largest Australian polling place, with almost 16,000 votes cast in 2010.

High Commissioner Mike Rann said all enrolled Australians in the UK should have the opportunity to be able to vote in the upcoming federal election.

“There is a large Australian community living in the United Kingdom, and similar to previous elections, we expect thousands will have their say and vote over the coming month.”

The High Commission in London will open its doors for pre-poll voting from Monday 26 August through to Friday 6 September, excluding Sunday 1 September.

1.   Vote in person at the voting centre at Australia House.

Pre-poll voting services will be offered by the Australian High Commission, which is located at Australia House, Strand, London WC2B 4LA (corner of Aldwych and Strand).

The High Commission will be open for pre-poll voting during the following times:

Pre-poll voting will not be available on Saturday 7 September 2013 due to the time difference between London and the closing of polls at 18:00 Australian Western Standard Time (AWST).

Postal vote applications can be submitted up until Thursday 5 September 2013. The AEC will send out ballot papers to a nominated address after candidate nominations close on Thursday 15 August 2013.

Ballot papers must be completed and posted back to the AEC on or before election day. You only have 13 days after the election for your ballot papers to be received by the AEC.

To apply for a postal vote you will need to:

To apply for a postal vote see aec.gov.au/election/pva/

*Please note: The following information was correct at the time of publication and is subject change. Consult the Australian Electoral Commission (AEC) website for the latest information.