After former German premier league player Thomas Hitzlsperger announced he was gay, Socceroos boss Ange Postecoglou has said he hopes Australian footballers would feel comfortable disclosing their sexuality if they wanted to. 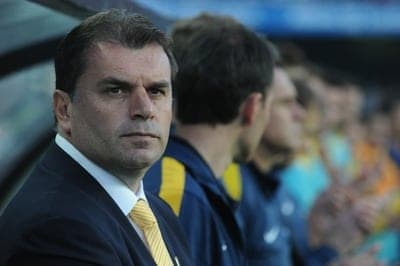 HOMOPHOBIA within Australian sport is being challenged by Socceroos boss Ange Postecoglou, who says Australian football should be an environment where gay players feel comfortable to come out.

After former German premier league player Thomas Hitzlsperger announced he was gay, Postecoglou said he hopes Australian footballers would feel comfortable disclosing their sexuality if they wanted to.

“What you want — in any form of life — particularly in our country, is that people feel comfortable to express themselves in any way they want to,” he said.

“If there is somebody that feels comfortable enough to do that – I don’t think as a society we’re closed-minded about these things.

“From our perspective, it’s about creating an environment that in our sport, in our nation, that allows people to feel comfortable in that space.”

Hitzlsperger, who has played for Aston Villa, Everton, West Ham and represented Germany 52 times has received strong support from the football community, including former teammates and clubs since announcing he is gay.

Ex-England captain Gary Lineker tweeted “Congratulations to Thomas Hitzlsperger on bravely being the first player to have played in the PL to ‘come out'” while Hitzlsperger’s former club Aston Villa also gave their support.

The acceptance of gay players within the professional sporting landscape in Australia has been evolving in recent times.

Last month Australian Rugby Union became one of the first major sporting bodies in the world to display a gay cup in their trophy cabinet.

Earlier in 2013, Carlton and Richmond Australian Football League (AFL) players marched together in support of gay rights at an annual gay pride event in Melbourne.

They were joined by openly gay amateur AFL player Jason Ball who launched a campaign in 2012 to tackle homophobia in Australian sport.

Because of the popularity of sport within Australia and the high profile of professional footballers, these initiatives are seen as significant for the wider social campaigns against the discrimination of gay men and women in Australia.