Australian police have reached a body in the Blue Mountains which they believe to be that of missing British-Australian man Gary Tweddle. The body was found 2km from where the 23-year-old was last seen alive seven weeks ago. 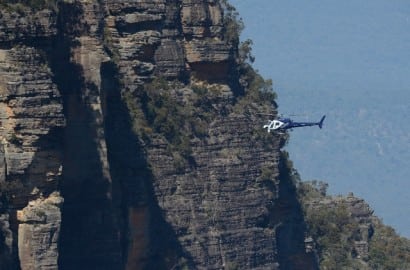 AUSTRALIAN police have reached a body in the Blue Mountains which they believe to be that of missing British-Australian man Gary Tweddle.

A striped shirt found near the body matched the description of the one Mr Tweddle was wearing on the night he went missing, said a police officer at the scene.

An ambulance rescue helicopter spotted the man’s body on Monday afternoon. It was located in a tree growing from a crevice in a cliff at Leura in an area inaccessible by foot.

Mr Tweddle, 23, went missing seven weeks ago from a work conference for his company Oracle following a night out with colleagues.

Police officers have abseiled down the cliff at the end of Sublime Point Road and were working to secure the body on Tuesday. However police said it would be several hours until the body was recovered and formally identified.

“I can confirm we have found a deceased male … in what’s described as a slot in the cliff line,” Superintendent Darryl Jobson said.

The police have been in close contact with Mr Tweddle’s family members.

“The family have been very strong and stoic throughout. It’s absolutely amazing to see the strength they’ve been able to garner from each other,” said Superintendent Jobson

“They have gone through a rollercoaster of emotions, as you can well appreciate.

“They are really after a sense of closure.”

Mr Tweddle’s girlfriend Anika Haigh travelled from Queensland to the Blue Mountains in the hope there would be a resolution following today’s rescue mission.

“Please know that nothing has been confirmed at this stage but I hope in a few hours we will have an answer either way,” Ms Haigh wrote on Facebook.

“One thing I know for certain is that Gary will come home one day – his fight, determination & ‘never give up’ attitude that we all loved so much about him will guide him.

“Your time of hide & seek needs to end now though please. Time to come home where you belong. I love you.”

Mr Tweddle moved from the UK in June 2005 at the age of 15, and lived in Sydney prior to his disappearance.

He was last heard from in the early hours of 16 July when he spoke on the phone to colleagues for 17 minutes, saying he was lost in bushland but could see a light on the hill.

Police have declared his disappearance as a suspected, accidental death in a report filed with the coroner last week.