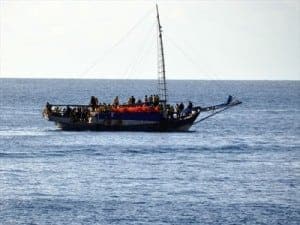 The boat set off from Indonesia, and was reportedly carrying asylum seekers from Iran, Afghanistan and Sri Lanka.

Border authorities confirmed two naval vessels had rescued 144 people from the water after the capsize.

“A total of six life rafts were deployed” to rescue the passengers as well as an overhead Orion aircraft and small boats from the naval vessels, he said, thanking rescuers for their “tough, hard, difficult and dangerous work”.

Customs said it had now suspended rescue efforts, as there were no signs of life.

The Australian newspaper estimates almost 45,000 so called ‘boat people’ have arrived in Australia’s north since Labor came into power in late 2008.

Prime Minister Kevin Rudd is expected to announce changes to Australia’s migration policy in the lead up to the election in November.