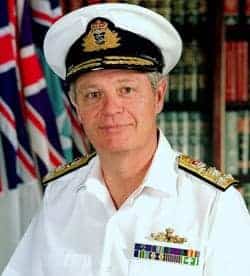 The admiral, who was defence chief under the government of John Howard, described the asylum seeker policy under the auspices of Immigration Minister Scott Morrison as a “mess that reflects badly on all of us” and described the detention camps as “jails”.

Admiral Barrie made the comments during the book launch of Why Seeking Asylum is Legal and Australia’s Policies are Not by international law academics Jane McAdam and Fiona Chong, in Sydney on Thursday, according to The Herald Sun

“Australians are doing their utmost to extinguish hope, the most powerful of human emotions,” said Barrie

Admiral Barrie said that desperate asylum seekers had been demonised. “I’m not sure we should continue to use the term ‘mandatory detention’ when we actually mean jail,” he said.

“At least in Australian jails the incarcerated have rights of access to legal support and representation. In these jails no such rights exist.”

Barrie said the Department of Immigration and Border Control was guilty of ‘double handling’ asylum seekers by sending those who had been seeking asylum from Iraq and Syria back to their countries while the immigration minister acknowledged the problems in those countries by offering 4,400 resettlement places.

The criticism comes amid reports of an asylum seeker being declared brain dead after contracting sever septicemia as he was not treated promptly.

Last year Admiral Barrie slammed the government’s ‘tow back’ policy which he said would be a risk to naval personnel and would see boats burned and sunk and people left in the water.

The book, Why Seeking Asylum is Legal and Australia’s Policies are Not, states that Australia’s policies towards asylum seekers are illegal under international law.

“This is doing a lot of damage to Australia’s reputation as a good international citizen.”

“The foreign minister, Julie Bishop, said ‘Australia cannot have an island mentality’ in relation to international trade and investment. This is a sentiment that should be applied to a refugee context as well,” states the book.

“Running this in secret does not stack up. We stopped the boats in 2001 without the need for any of it,” said Admiral Barrie, questioning the need for the department’s secrecy and the cost of Operation Sovereign Borders.

“The current mechanisms for managing asylum seekers does seem to me to be outrageously expensive for a country that was built on immigration.”