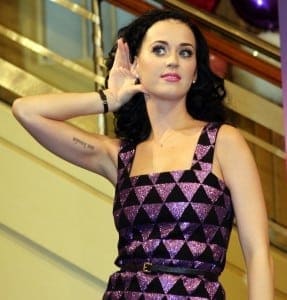 Mr Abbott was given the opportunity to interview Ms Perry by the 2DayFM radio network along with several other high-profile Australians. Mr Abbott asked the American singer when she would be touring Australia, at which point Ms Perry took the opportunity to discuss the Liberal leader’s social policy.

Mr Abbott said: “When are you coming back (to Australia)? We need you, we want you.”

Coalition policy currently supports a traditional definition of marriage, and Mr Abbott opposes any changes to the Marriage Act. Ms Perry is an outspoken supporter of same-sex marriage, and urged Australian voters to question Mr Abbott’s policy on the issue in the lead-up to the federal election on 13 September.

Ms Perry told Mr Abbott: “I love you as a human being, but I can’t give you my vote.”

Ms Perry went on to say that she liked Mr Abbott as a person, would like to meet his daughters and suggested that they have lunch together “if he lets me into the country.”

Ms Perry told 2DayFM host Jackie O: “I said ‘hey, I like you as a human being I just don’t believe in your policies so that’s what a lot of people should be doing.’”

Mr Abbott also expressed an affinity for Ms Perry’s music, telling 2DayFM that her hit single Hot N Cold should be his campaign anthem. He said that he first heard the song during the 2011 AFL Grand Final breakfast and made an immediate connection with the music.

The lyrics of Hot N Cold – one of Ms Perry’s biggest international hits – tell the story of a romantic partner that regularly changes their mind on a range of issues. Shadow Treasurer Joe Hockey responded to Mr Abbott’s choice of campaign anthem shortly after the interview, claiming that the Opposition Leader meant that the lyrics related to Prime Minister Kevin Rudd rather than himself.

Do you think Hot N Cold is the best campaign anthem for Tony Abbott? What else would you suggest?