AUSTRALIAN ELECTION 13 | With the announcement of the 7 September election, Kevin Rudd and Tony Abbott have made a first pitch to voters. 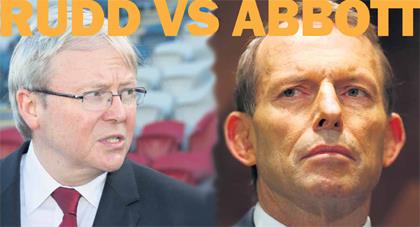 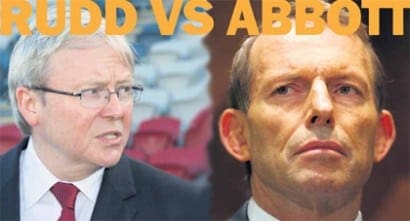 A PRIME MINISTER you can trust, or an opposition leader who’s fair dinkum.

Rudd made his pre-election pitch in the same prime minister’s courtyard at Parliament House were three years ago he tearfully stepped down.

He made it clear this election is about unfinished business.

Borrowing a line from former Liberal prime minister John Howard, Rudd asked voters “who do you trust” to deal with the challenges presented by a faltering global economy.

He portrayed himself as the election underdog with a “steady hand” and a positive plan for the future.

In contrast, he said Abbott was negative, immersed in “old politics” and three-word slogans.

Rudd also blatantly borrowed from US President Barack Obama by appealing to supporters to donate a few dollars to Labor to counter the “few millionaires” bankrolling the Liberal-National coalition.

Making his pitch surrounded by portraits of past Liberal leaders in the opposition party room, Abbott kept to the script he’s been spruiking for three years.

He harked back to the “faceless men” who ousted Rudd in 2010, then turned on Julia Gillard this year, contrasting it to his stable leadership and team.

“It’s really about who is more fair dinkum. Who can you rely on to build a better future?” Mr Abbott said.

Abbott’s key messages are well-known: stop the boats, axe the carbon and mining taxes, get the budget under control, strengthen the economy.

But there was a new twist – under no circumstances would he lead a minority government.

This is a message aimed at disgruntled voters toying with the idea of backing conservative minor parties such as those headed by Clive Palmer and Bob Katter.