SPECIAL FEATURE: Despite some tightening on two-party preferred measures, the polls have Labor on track for a win on May 18. 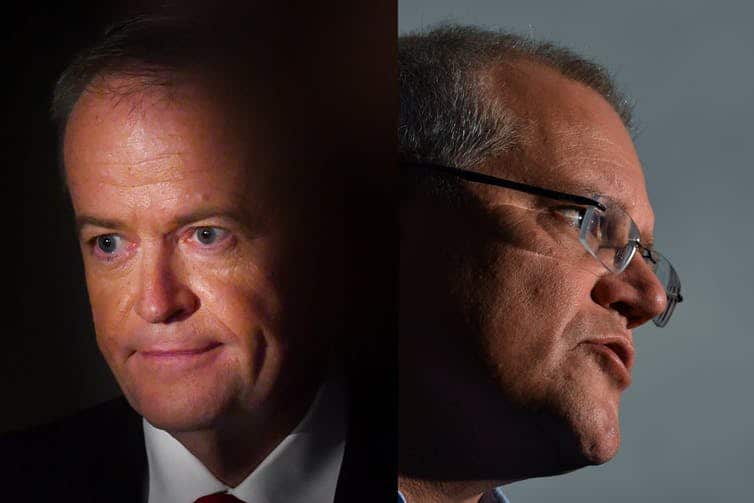 Respondent allocated preferences in Ipsos were also 52-48 to Labor. Ipsos has had no difference between respondent and previous election preferences since Scott Morrison replaced Malcolm Turnbull as PM. Rounding probably also assisted the Coalition.

In Newspoll, 44% were satisfied with Morrison’s performance (down one), and 45% were dissatisfied (also down one), for a net approval of -1. However, Bill Shorten’s net approval tanked six points to -18, his worst since February. Morrison led Shorten by 46-35 as better PM (45-37 last week).

If we compare this Newspoll to the post-budget Newspoll for a better comparison with Ipsos, Morrison’s net approval is down three points, Shorten’s is down four, and the better PM is unchanged. So even compared to the last time both pollsters were in the field, there is considerable difference in the leaders’ ratings trends.

These leaders’ ratings changes are important as they are indicative of which side is winning the policy arguments. The movement to Labor on all these measures in Ipsos is encouraging for them. If Ipsos is correct, Labor is likely to win the election comfortably.

The drop in Shorten’s Newspoll ratings appears to indicate that Coalition attacks on Labor’s abolition of franking credit cash refunds policy, and on economic costs associated with Labor’s climate change policy, are having an impact. If Newspoll trends continue, the Coalition is a reasonable chance of winning the election.

Regarding Newspoll’s decision to assign 60% of UAP preferences to the Coalition, Bonham says that Newspoll has adjusted some preferences in favour of the Coalition, but there has been no preference adjustment to favour Labor. Without Turnbull, Greens preferences could be a bit better for Labor, and many independents are running on climate change issues, so the remaining Others could be more Labor-friendly.

Newspoll, which is conducted by YouGov Galaxy, polled Pearce on April 20. Primary vote changes since that Newspoll were Liberals steady, Labor down one, Greens up three, One Nation down one and UAP down six. All Others are at 7%, which is more credible than the 2% in that Newspoll.

In Pearce, voters believed action on climate change is more important than detailed costings by a 53-42 margin. There were similar margins in Swan (49-38) and Cowan (52-38).

The Sun-Herald reported that a Lonergan poll of Warringah for GetUp, conducted May 1 from a sample of 805, gave independent Zali Steggall a 56-44 lead over incumbent Tony Abbott. The only primary vote reported was Abbott’s at 38%, down from 51.6% in 2016.

In 1996, Pauline Hanson was disendorsed as the Liberal candidate for Oxley, but began her political career by winning that seat. Disendorsement has no impact on the vote count.

In April I wrote that, from the ABS 2016 Census, those aged 50 and over represented 43.7% of all eligible voters. However, the population has aged since then, and enrolment rates are higher with older people than younger. Those aged 50 and over were 47.6% of the final electoral roll.

Those aged 18-34 were 26.7% of voters, and those aged 35-49 were 25.7%. In the Newspoll breakdowns I referenced in the April article, younger people were strong for Labor, so the higher proportion aged 50 or over is good news for the Coalition.

Analyst Peter Brent has a graph showing the ageing of enrolled voters in 2019 compared to the 2016 election.

The polls below were conducted the weekend before last.

In this poll, Labor gained two points on primary votes and the Coalition gained one, but the reduction in Greens preferences from their two-point drop hurt Labor after preferences. Essential still uses 2016 preference flows, and The Poll Bludger estimated this poll would be 51.9-48.1 to Labor from the unrounded primary votes. Rounding contributed to the result.

Although voting intentions moved to the Coalition, better PM moved to Shorten. He trailed Morrison by 40-31 (44-31 in early March). Morrison led Shorten on most of Essential’s personal relatability measures.

Voters thought Labor would win the election by a 59-41 margin. 40% said health care was very important in deciding their vote, followed by national security on 35%, economic management on 33%, jobs and education both on 31%, tax on 28%, the environment and climate change both on 26%, immigration on 25%, housing on 24% and infrastructure on 22%.

19% said they had paid no attention to the election campaign, 29% a little attention, 33% some intention and 20% a lot of attention. 56% said they would vote on election day, 21% would pre-poll vote and 12% would vote by post. There was little difference by party on this question despite the greater use of postal voting by Coalition voters.

Roy Morgan research has been conducting face-to-face polling every weekend for a long time, but the results are only occasionally released. Such releases have tended to occur when the poll is good news for the Coalition.

The Morgan poll has had the most dramatic recovery for the Coalition. Labor led by 55-45 before the budget, but the lead was reduced to 52.5-47.5 in the post-budget Morgan poll. In polling conducted over the Easter weekend (April 20-21), Labor’s lead fell to 51-49, and that result was repeated the weekend before last. The latest Morgan poll was conducted April 27-28 from a sample of 826.

Primary votes in the latest Morgan were 39.5% Coalition, 36% Labor, 9.5% Greens, 2.5% One Nation and 2% UAP. Bonham says Morgan skews against politically incorrect parties like One Nation and the UAP, and in favour of nice-sounding minor parties.

Prior to the 2013 election, Morgan regularly published face-to-face results, and they would always skew to Labor. However, the Coalition has been assisted in this poll by no longer being seen as the most right-wing party.

Seat polls of Sturt and Braddon

A ReachTEL poll of the Tasmanian seat of Braddon for the Australian Forest Products Association, conducted April 29 from a sample of 861, gave the Liberals a 51-49 lead (51.7-48.3 to Labor at the 2016 election after a redistribution). Primary votes, excluding 4.5% undecided, were 40.0% Liberals, 35.1% Labor, 6.6% Greens, 5.5% UAP and 3.7% Nationals. This poll was taken before the resignation of Jessica Whelan as the Liberal candidate for Lyons.

By Adrian Beaumont, Honorary Associate, School of Mathematics and Statistics, University of Melbourne