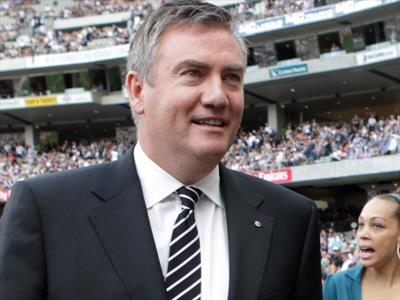 McGuire doesn’t believe he’ll face any fine or ban after suggesting Goodes, who was last week called an ape by a fan, would be a good person to promote the musical King Kong.

“I wasn’t racially vilifying anybody,” McGuire told a packed media conference in Melbourne.

He says he unreservedly apologises but isn’t considering resigning.

“I’m not a racist. I’ve done a lot of things in the past and continue to fight for the cause of equality in Australia.

“People don’t resign because they make a slip of the tongue. It’s as simple as that.

“If I stood up and was racially vilifying somebody then not only should I be resigning I should be sacked.”

Days after saying sorry to the Sydney star for a 13-year-old Magpies fan’s racist taunt, McGuire says he unreservedly apologised for his remarks during his breakfast show on Triple M in Melbourne on Wednesday.

McGuire has apologised to the Aboriginal Swans player, who he says was “really upset” but accepted his apology.

“Adam was gracious enough to take my call and expressed his disappointment `particularly given what we’ve been through together last weekend’,” McGuire said.

“I agreed entirely with him and I’m devastated that I am responsible for bringing this issue back into the public arena.

“I sincerely apologise for the hurt caused.”

McGuire said he mumbled his words and said something he didn’t intend.

“I made a mistake. I made a slip of the tongue. I put my foot in my mouth.

“I was half asleep when I did it.”

“The one thing you do know about Eddie, and you saw it on Friday night with his actions straight after the Adam Goodes incident, he’s the last person who has got a racial bone in his body,” he told News Limited.

“He just got it wrong this morning. He’s apologised.”

Collingwood star Harry O’Brien has slammed McGuire, his club’s president, over the comments.

“It doesn’t matter if you are a school teacher, a doctor or even the president of my football club I will not tolerate racism, nor should we as a society,” O’Brien tweeted.

“To me Eddie’s comments are reflective of common attitudes that we as a society face,” he said.

“To me Australia is very casual with racism, I would argue that many people in this country would not think what Eddie or the 13yr old girl said last friday is ‘bad’.”

McGuire had rushed to the Sydney rooms on Friday night to apologise after the 13-year-old Collingwood fan racially abused Goodes.

He said he would rather be judged for that than Wednesday’s comment when he was “zoning out a little bit”.

“Every part of my being is about equality,” McGuire said.

“It burns me to the core that I would be associated with vilifying.”

McGuire said his comment differed from the girl’s “ape” remark.

“Any inferences towards apes, gorillas, monkeys etcetera is the height of racism because it makes believe that people think that somebody is subhuman.

“I wasn’t even thinking that at the time.”

McGuire said his comment was meant to be an ironic reference to the techniques once used by some PR consultants to publicise new shows.

Triple M breakfast co-host Luke Darcy had described a promo for the musical as great and McGuire replied, “Get Adam Goodes down for it do you reckon?”.

Darcy replied he wouldn’t have thought so.

But McGuire persisted: “You can see them doing that can’t you? Goodsey. You know with the ape thing, the whole thing, I’m just saying the pumping him up and mucking around, all that sort of stuff.”

Goodes, a dual Brownlow Medallist and premiership player, tweeted “Morning Australia this is what I have woken up to” and used the hash tags #racismitstopswithme and #bigweekinfooty.

Triple M, part of Southern Cross Austereo, says McGuire has an exemplary record on indigenous issues and it completely accepts his explanation.

The AFL said McGuire’s comments would be dealt with under the league’s racial vilification process.

He said the AFL had deemed that McGuire, as a club president, must go through the racial and religious vilification policy process required by the AFL Player Rules.

“As a result, Mr McGuire will be treated under the rules as we would anyone else within the AFL competition.” – AAP