Prime Minister Tony Abbott says he wants to get Australia’s relationship with Indonesia right, but the opposition believes there’s a big problem. 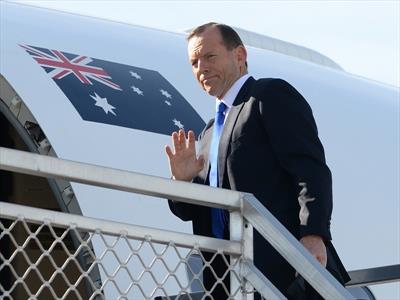 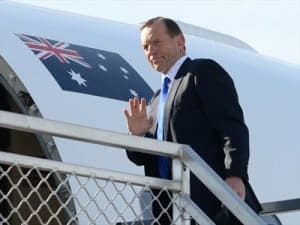 PRIME Minister Tony Abbott has arrived in Jakarta, as the Australian government again defends its response to a distressed asylum seeker vessel that sank with the loss of up to 36 lives.

Mr Abbott landed in the Indonesian capital about 3pm (AEST) on Monday for his first foreign visit since his Liberal-Nationals coalition won power three weeks ago.

The asylum seekers issues threatens to dominate the trip, although Mr Abbott is keen to promote trade, education, defence and aid links to boost Australia’s relationship with the world’s fourth most populous country.

“It is in many respects our most important relationship,” he said before departing.

“It is important to get it right at the start of this new government.”

The prime minister was due to hold official talks with President Susilo Bambang Yudhoyono later on Monday ahead of an official dinner at which he will give a speech.

Back home, Immigration Minister Scott Morrison delivered a weekly update on asylum seeker boat arrivals and outlined the events surrounding the sinking of the vessel off the Java coast on Friday.

The coalition government was under fire for its alleged delayed response to the vessel after some survivors said the tragedy could have been prevented.

But acting head of Australia’s border protection operation defended the response, saying authorities had taken every step and rejected claims the Australian Maritime Safety Authority (AMSA) knew about the boat 26 hours before it foundered.

Air Marshal Mark Binskin said the first time authorities were told of the vessel was at 7.57am (AEST) on Friday, when an Australian Federal Police officer on Christmas Island received a call from a Melbourne-based friend of people on the boat.

“I will say, from what I’ve got speaking to AMSA about their co-ordination with those that were on the vessel, there was a large level of confusion, disorientation,” he said.

“There is no record of any contact before then.”

Air Marshal Binskin said 31 people died and 22 survived but Indonesian authorities say the death toll has risen to 36 and it’s unlikely anyone else will be found alive.

Mr Morrison also rejected claims by some of the survivors that Indonesian soldiers had driven them to drop off points to get on the boat for Christmas Island.

“I’m not about to give any substance to a claim that at this stage is speculative,” he said.

“All the focus will be on this very big problem in our bilateral relationship, which is all of the new government’s making,” he said.

The centrepiece of the government’s asylum seeker policy is its plan to turn back boats to Indonesia, where it’s safe to do.

Mr Abbott will return to Australian on Tuesday afternoon. -AAP