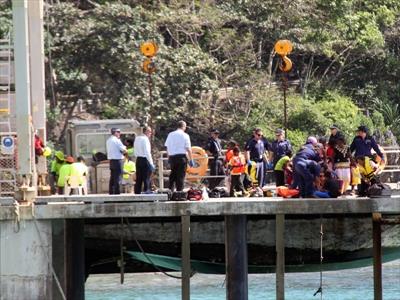 AUSTRALIAN authorities are too busy to recover the floating bodies of asylum seekers whose boat sank near Christmas Island.

Thirteen bodies were spotted during the air and sea search for the boat, which was believed to have been carrying about 55 men, women and children when it capsized northwest of the island.

A three-day search for any survivors was called off on Sunday with not a single person recovered from the water.

Customs says no attempt to retrieve the bodies will be made on Monday because border protection vessels and aircraft are involved in a number of “high priority operations” in waters near Christmas Island and elsewhere.

“Our priority in those operations remains the protection of life, responding to other vessels which may require assistance and preventing further loss of life,” a Customs spokeswoman told AAP on Monday.

“When those operations have been concluded and there is no further risk to life, Border Protection Command will endeavour to recover, where possible, any bodies which may be relocated.”

The spokeswoman added that the likelihood of successful recovery would diminish over time.

Asked whether the bodies would eventually be recovered, the spokeswoman said she was “not sure”.

“Where it is possible, of course we will endeavour to locate and recover the bodies,” she said.

“But at this stage, I don’t have a timeframe on that.”

Border protection commander Rear Admiral David Johnston told reporters on Sunday the focus was on finding people alive and the recovery of bodies was complex and time consuming.

The navy boat sent to look for survivors was later redirected to look for another vessel that had called for help.