Can the Labor party claim to be ‘the voice for Australian women’?

Feminists fear a massive Labor defeat in September will set back their cause for up to a decade. 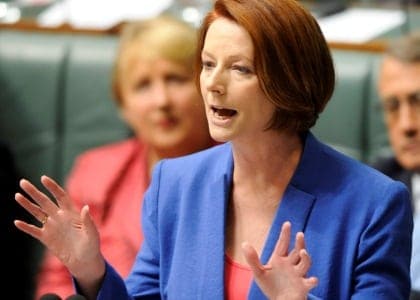 A DECADE before Julia Gillard became Australia’s first female prime minister she delivered a 101 lecture on menstruation to parliament, primarily for the benefit of her male opponents.

It was 2000 and the Howard government was whacking the GST on feminine hygiene products or a “tax on women for being women”, as Labor labelled it.

Gillard took then health minister Michael Wooldridge to task for comparing tampons to shaving cream and his apparent confusion about menstruation.

“It is not a question of illness, it is a question of dealing with a health issue,” Gillard said, referring to warnings about toxic shock syndrome and why it was important to regularly change tampons.

“One would not have thought one would need to explain these things to the minister for health but, unfortunately, we do.”

Fast forward 13 years, and Australian women are still being taxed every month, despite Gillard’s previous outrage and her ascension to the top job.

The GST on tampons collects $25 million a year in revenue, a tiny proportion of the $376 billion total government tax take.

Yet Labor under Gillard has done nothing to rectify the wrong she exposed in 2000.

It’s one example that critics, even some supporters, use to question the prime minister’s commitment to feminism.

She talks the talk, but doesn’t walk the talk, they say.

That view goes some way in explaining a lukewarm reception, outside the Labor faithful, to a speech Gillard gave this week to trumpet her feminist credentials.

Behind closed doors she told a Women-for-Gillard campaign launch the coalition’s “men in blue ties” led by Tony Abbott would marginalise women and make abortion a “political plaything”.

Feminist Eva Cox dismisses the abortion comments as “over the top” dreamed up by Labor’s “backroom boys”.

Two male Labor backbenchers publicly doubted the wisdom of reigniting the abortion debate even though Democratic Labor Party senator John Madigan, who could potentially hold the balance of power in the Senate after the September 14 election, has a private bill to ban Medicare funding for gender-selection abortions.

In any event, Abbott on Thursday ruled out making any deals with Madigan on abortion in return for the senator’s support for coalition legislation.

While Gillard was globally lauded last year for kicking goals for the sisterhood with her misogyny speech to parliament, Cox says it is big stretch to suggest Labor is the “natural party for women”.

On the day of the speech, parliament approved government legislation moving single mothers off Parenting Payments and onto the dole, forcing tens of thousands of families to live on $35 a day.

Since then some charities have cited instances of desperate single mums starving themselves so their children can eat.

Medicare statistics show the number of taxpayer-subsidised pill prescriptions has fallen from more than one million in 2000 to just under 600,000 in 2012.

An estimated 1.4 million Australian women are on the pill and the majority are forced to dig into their own pockets for prescriptions that aren’t subsidised under the Pharmaceutical Benefits Scheme.

For the newer varieties, that’s up to $30 a month, more than the $5-$20 it costs for the subsidised versions.

Few would doubt Gillard has faced a tougher ride at the top than her male predecessors.

Jibes about her body shape and fashion – even from such feminist icons as Germaine Greer; vitriolic references to her gender – Ditch the Witch/Bitch placards and; poor taste references to her late father have been an almost constant during her three years in the job.

Liberal senator Bill Heffernan said Gillard was unfit for leadership because she was “deliberately barren”.

This week she was “Kentucky Fried Quail: small breasts, huge thighs and (offensive remark omitted) in a menu produced by a Brisbane restaurateur for a Liberal-National Party fundraiser.

Commercial male shock-jocks have been at the forefront of the charge to bring Gillard to heel.

Yet, she is prepared to sidle up to controversial radio host Kyle Sandilands whose on-air record is littered with misogynistic rants.

Gillard appears reluctant to back Labor’s quota of getting 40 per cent of women into winnable federal seats such as Batman where she is backing factional powerbroker David Feeney.

Cox says in some cases Gillard has let down the team with poor judgment.

“Her attitude towards the Batman preselection and talking to Kyle Sandilands suggests she doesn’t get it,” she told AAP.

She has kept her minority government alive against a hostile opposition since September 2010.

Parliament has passed 557 bills, including landmark legislation on climate change that puts a price on carbon pollution – something beyond her predecessor Kevin Rudd who had more numbers in parliament.

A record number of women are in cabinet and in the ministry.

But women only make up 30 per cent of MPs and senators in parliament.

Gillard has already made history for women, but the fear amongst feminists is that a massive Labor defeat in September will set back their cause for up to a decade. – AAP