Call me maybe; time for Abbott to dial Putin

There is mounting pressure for Prime Minister Tony Abbott to call Vladimir Putin and obtain the release of an Australian Greenpeace activist being detained in a Russian prison. 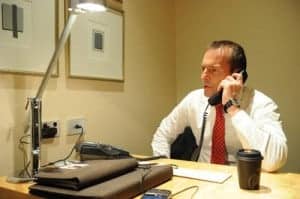 GERMAN Chancellor Angela Merkel expressed her concerns to Russia’s President Vladimir Putin directly. Prime Minister David Cameron has said he is prepared to contact him as well. And Australian Prime Minister Tony Abbott has… well we’re not exactly sure what he’s done to help the plight of the Greenpeace activists held in a Russian detention centre.

Australian Greens leader Christine Milne is demanding Abbott make a call, and intervene at the highest level to obtain the release of an Australian activist from a Russian jail.

“I am calling on Tony Abbott to pick up the phone to President Putin and seek the release of Colin Russell,” she told reporters in Sydney.

Russell, 59, is one of 28 international Greenpeace activists, as well as a freelance photojournalist, and a film maker being held by Russian authorities following a protest against oil drilling in the Arctic in September.

The 30 environmentalists were arrested after trying to scale the Prirazlomnaya oil rig, believing oil drilling in the Arctic is dangerous and risks destroying the sensitive environment. They have been detained by Russian investigators for piracy and hooliganism charges, which carry sentences of up to 15 years.

Senator Milne said other countries were taking the detention of their citizens more seriously than Australia.

David Cameron told parliament he would personally speak to the Russian President if it would help the six Britons detained.

“I will look at every single intervention I could possibly make in order to help and if contact directly with President Putin would be helpful, then that is certainly something I would be prepared to consider,” Cameron said in the House of Commons.

Despite no Germans being detained, German Chancellor Angela Merkel voiced her concerns to Putin over the arrests, and hoped the case will soon be resolved.

However, so far Abbott has given Putin, the Australian public and Colin Russell the silent treatment.

“While I acknowledge the consular support being offered by Australian officials, it is no substitute for political representation,” Milne said in an earlier statement.

“Consular support is one thing, but political intervention is what is needed now.”

“When the prime minister won’t even pick up the phone to help secure the release of a peaceful protester held by a foreign power on ridiculous charges, something is seriously wrong.”

“At the very least we need a letter of guarantee which would enable him to get bail,” Milne said.

It is hard to know what a phone call from Abbott to Putin would actually achieve. The two countries have recently disagreed over the conflict in Syria and the detention of punk band Pussy Riot.

Furthermore, during the recent APEC summit in Bali it was suggested there was tension between the two leaders.

A senior official attached to another APEC nation’s delegation says there was tension in the air when Abbott turned up late to an APEC session and sat next to Mr Putin, who did not so much as look at the new Australian PM.

“There was no engagement, no acknowledgement, an iron curtain,” the official who was present at the meeting told AAP.

Australian officials insist there was nothing untoward in Putin’s treatment of Abbott.

In a letter to his family, Russell who is kept in his cell for 23 hours a day, describes the below freezing conditions in Murmansk.

He said if prisoners in Australia faced the same conditions he was facing in Russia, there would be outrage.

He describes in the letter how he has lost a lot of weight, and says the iron bars on his bed cut into his back.

“They don’t give you anything at all. I am OK with it but there would be outrage if this was at home,” Russell said.

“I do not want to think of what happens if you are convicted. God knows what they do with the real crims.”