Banning burqa at Australia’s parliament may have PM’s backing

Australia's prime minister says there may be good reason to ban the Islamic burqa in Parliament House. 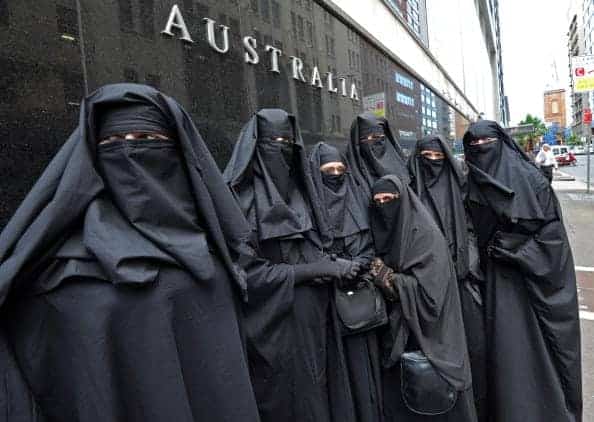 A proposal to ban the burqa in Australia’s Parliament House may have the support of Prime Minister Tony Abbott, despite his assertion that government should not tell people what to wear.

A campaign to ban the burqa at Parliament House has been led by Liberal senator Cory Bernardi. Speaker Bronwyn Bishop has requested an independent security assessment of the risks of full facial coverings from ASIO and the Australian Federal Police ahead of a final decision on the proposal, possibly within a week.

PM Tony Abbott on Wednesday expressed his personal dislike of the Islamic headwear, but said it was not for the government to mandate what people wear.

“Now I’ve said before I find it a fairly confronting form of attire and frankly I wish it weren’t worn,” he said.

“We are free country, we are a free society and it’s not the business of government to tell people what they should and shouldn’t wear.

Mr Abbott also said as far as he was aware, no one had ever entered Parliament House “so attired.

However, he appeared to give some tacit support for a burqa ban in the building.

According to Fairfax Media, Senator Bernardi said his campaign comes from having seen veil dressed people inside the parliament building.

“What prompted my security concerns three years ago was when I did encounter a group of veiled individuals and inquired with security whether they were required to show their face before entering the building,” he said.

“This then led to the extraordinary admission by parliamentary officials that anyone could enter with their face covered even if they were wearing a balaclava, this was a ridiculous position then and in light of the heightened security tensions it appears even more ridiculous now.”

When questioned about the discrepancy between his claim of sighting full face veils in Parliament House and Tony Abbott saying he had never seen then, Mr Bernardi replied that it was a big place and people working in the building would not see all the same visitors.

If the rule change is introduced, it will only be veils that completely cover a person’s face that are banned. Other Islamic attire, such as hijabs or head scarves, would not be subject to the new ban.

IMAGE: File image – Men and women dressed in burqas from the group ‘Faceless’ call for the banning of the conservative Muslim apparel throughout Australia during a 2012 rally in Sydney. (TORSTEN BLACKWOOD/AFP/Getty Images)