On paying for the war against Islamic State in Iraq, Australia's prime minister says, “We think we can afford it.” 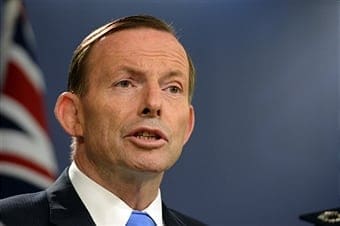 Tony Abbot insists there are no plans to increase ordinary Australians’ tax to help fund the the nation’s involvement in the war against Islamic State (ISIS) in Iraq.

This came as the Coalition are preparing to deploy special forces to enter Iraq in an advise and assist’ role.

In a press statement in Canberra on Tuesday, the PM said the expense would be absorbed in a broader budget context’ adding, “We think we can afford it.

While Abbott agreed that the situation was expensive and would, in his words, cost a “significant amount of money he added that in the context of Australia’s annual AU$400 billion budget, “We can manage these things.

These assurances from Mr Abbott came shortly after the Treasurer Joe Hockey said in a public statement that Australia’s involvement in the Middle East crisis would mean that, “key budget forecasts would have to be substantially reworked. This, he said, is due to faltering world growth and falling commodity prices.

When Abbot was asked if he could give assurances that that tax paying Australians would not be pressed harder to fund the conflict, Abbott said, “Yes, I can.

“This is a government which believes in lower taxes not higher taxes, he said. “We will pay what we must to do our duty by our country and by the wider world.

In response, opposition leader Bill Shorten said that while Labor supports the involvement in Iraq, it would not support “slugging ordinary Australians to fund the situation.

Shorten agreed with Abbot saying the conflict costs should be recovered from existing resources.

Earlier this week David Johnston, Australian Defence Minister, stated that the IS militants were gearing up in anticipation of air strikes.

“I think that’s pretty certain that they will adapt very quickly not to be out in the open where the Iraqi security forces can call in an air strike, he said.