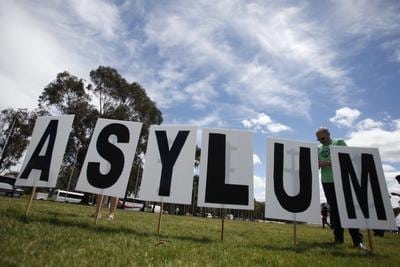 Delivering the annual Gandhi Oration at the University of NSW on Thursday, Keneally said the coalition government’s hardline `stop the boats’ stance reflected poorly on the country.

“Here we Australians are … back to being seen as the hayseeds and buffoons we were in the era of White Australia,” he said.

Keneally said the deportation and indefinite detention of asylum seekers amounted to abuse.

“I feel that I am a citizen of a nation which has lost some form of Moral Ashes Series, and that is really as much a vanity as wanting to win a real Ashes series.”

He said the coalition government’s unwillingness to engage in regional solutions would damage Australia’s reputation.

“If our nation goes on pursuing such policies, then our national honour is violated,” Keneally said.

The 78-year-old author is best known for his prize-winning 1982 novel Schindler’s Ark, which was adapted for Steven Spielberg’s Oscar-winning film Schindler’s List.

The Gandhi Oration is held every year on the anniversary of the assassination of Indian independence leader Mahatma Gandhi. -AAP

Virgin Atlantic’s rescue deal is something of a watershed in how companies can escape insolvency.