For only the second time in the past six years, the Australian Navy intercepted a boat and handed the asylum seekers back to Indonesia. 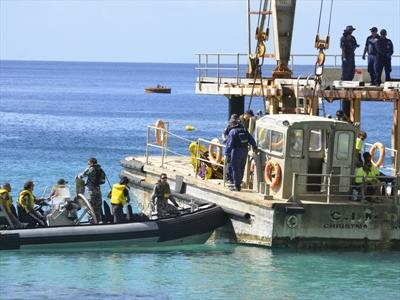 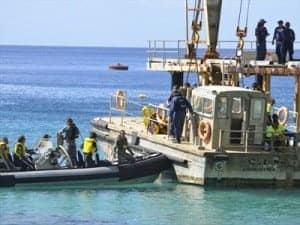 THE Australian Navy has sent more than 40 asylum seekers back to Indonesia, after intercepting their boat off the coast of Java.

The boat carrying 44 asylum seekers attempting to get to Australia, issued a distress call 40 nautical miles off Java yesterday morning.

The Australian Navy intercepted the asylum vessel, after Indonesia’s rescue agency Basarnas said it did not have the capability to reach the boat.

The Australian Navy advised Basarnas it would drop the asylum seekers and two crew members off.

In the early hours of the morning, the Indonesian rescue crew met the Navy ship off the coast of Java and the passengers were handed over, and returned to the mainland.

Azam, one of the intercepted boat’s crew members told the ABC the boat was not broken, despite passengers calling Australia to be rescued.

He said there was nothing wrong with the boat when the Australian Navy intercepted it, and the engine was working.

It appears the asylum seekers called the Australian Maritime Safety Authority, hoping to get rescued and taken to Australia.

He said the Navy set fire to the boat at sea.

Suyatno, head of operations at the Jakarta office of Basarnas said he did not know why Australia did not take the asylum seekers to Christmas Island.

The Australian Navy only handed asylum seekers back to Indonesian authorities once during the six years of the last Labor government.

On all other occasions where a boat of asylum seekers were intercepted by Australian authorities assisting in their rescue, they were taken to Christmas Island.

This rescue and return of asylum seekers hints at a new and tougher approach by the Australian government, according to the ABC’s Parliament House bureau chief Greg Jennett.

Jennett predicts this action could establish a precedent with Indonesia, and future calls for Australian help and rescue will come with a condition that the passengers and crew will be handed back.

However, such claims may never be confirmed or denied, following the Government’s recent communications clampdown.

The Government are sticking by its policy of not commenting on the operational details of any intercepts at sea under Operation Sovereign Borders.

Prime Minister Tony Abbott recently ordered all ministers to obtain approval from his office prior to speaking to the media, including the ABC.

The Australian Navy’s return of passengers back to west Java has caused a minor dispute with local Indonesian authorities, who did not want responsibility for the asylum seekers.

This recent incident comes as a diplomatic row continues to simmer between Australia and Indonesia about the handling of asylum boats.

Prime Minister Tony Abbott described tensions between the two countries over the Coalition’s border protection policy as a “passing irritant”.

“The last thing I would ever want to do is anything that doesn’t show the fullest possible respect for Indonesia’s sovereignty,” he said.

“We are already at this very moment cooperating closely with the Indonesians… I don’t believe that the incoming government will do anything that will put that cooperation at risk. We want to build on that.”