Responding to the humanitarian crisis in Iraq, Australia is opening its immigration gates to persecuted Iraqi nationals fearing for their lives. 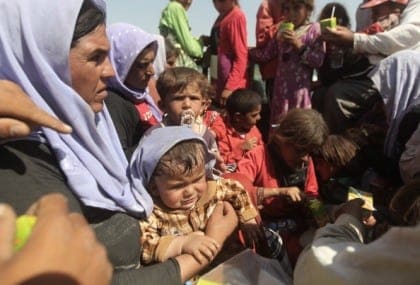 Australia has confirmed that Iraqis fleeing the violent Islamic State jihadist tyranny in their home country can apply for one of the 4,000 special refugee visas set aside for ‘those most in need of resettlement due to desperate circumstances.

The Australian Federal Government has announced that they have opened immigration applications from those Iraqis in dire need of refugee status.

Immigration Minister Scott Morrison has acknowledged the latest Iraq crisis and said the vulnerable from this country are now added to the list of foreign nationals that will be considered eligible for special humanitarian visas.

Speaking to ABC NewsRadio federal government treasurer Joe Hockey said, “If we do not act now then it will be genocide on the scale that we haven’t seen in the world for a long period of time. It is always the case that evil has its way when good people do nothing.

“We have to stop the systemic slaughter of people wherever it might be in the world.”

While Labor’s immigration spokesman Richard Marles has welcomed the inclusion of Syrian and Iraqi refugees he added that Australia’s 13,750 annual refugee places is too low and Australia could target for providing 20,000 humanitarian visas.

But Greens senator Sarah Hanson-Young insisted that and additional 5,000 humanitarian places for Iraqis should be introduced immediately.

“We need to be doing everything we can to help in the humanitarian effort (for) those who are facing desperate and urgent persecution in Iraq and of course Syria,” said Hanson-Young.

“This is doable. It is right thing to do and it makes sense,” she added, speaking to ABC NewsRadio.

At the same time, Prime Minister Tony Abbott confirmed that Australian military forces did their first air drop in the Mount Sinjar region in Iraq.

“The aid drops will continue until the security of the Yazidi civilians is assured and they can safely move from Mount Sinjar,” confirmed Mr Abbott.

IMAGE: Displaced Iraqi families from the Yazidi community rest after crossing the Iraqi-Syrian border at the Fishkhabur crossing, in northern Iraq, on August 13, 2014. At least 20,000 civilians, most of whom are from the Yazidi community, who had been besieged by jihadists on Mount Sinjar in northern Iraq have safely escaped to Syria and been escorted by Kurdish forces back into Iraq, officials said. The breakthrough coincided with US air raids on Islamic State fighters in the Sinjar area of northwestern Iraq on August 9, and Kurdish forces from Iraq, Syria and Turkey working together to break the siege of Mount Sinjar and rescue the displaced. (Photo credit should read AHMAD AL-RUBAYE/AFP/Getty Images)

Camping and caravanning has typically appealed to a certain group of Aussies. But that’s about to change because we’ve all...

The tourism industry is anticipating a surge in people taking active outdoor breaks close to home.

We also need every person in Australia to take the coronavirus threat seriously and stick to the basics: physical distancing,...

The prime minister told a news conference his proposal would be to contain the flow rather than pause it.