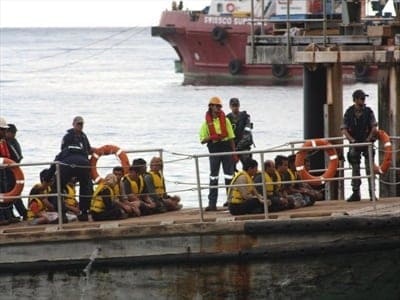 AUSTRALIA’S track record on asylum seekers and failure to raise human rights abuses with Asian countries has been criticised in a global report card.

In its 2014 annual report, Human Rights Watch accuses Australia of demonising asylum seekers trying to reach the country by boat.

“In 2013, successive Australian governments continued to engage in scare-mongering politics at the expense of the rights of asylum seekers and refugees,” the report says.

“(They) have prioritised domestic politics over Australia’s international legal obligations.”

“Australia also has been increasingly unwilling to publicly raise human rights abuses in countries with which it has strong trade or security ties, fearing that doing so would harm its relations with Asian governments,” the report authors wrote.

“Such reluctance to speak out validates the stance of those who mistakenly view raising human rights as an act of diplomatic aggression rather than a normal part of principled diplomacy.”

Mr Abbott has said it’s not his job to stand up and give lectures to the wider world.

Australia was also marked down for the Abbott government’s slashing of foreign aid.

The lack of progress on closing the life expectancy gap between Aboriginal and non-indigenous people was also noted.

On disability rights, the group attacked the continued legalisation of involuntary sterilisation of women and girls with disabilities with the family court or guardianship tribunal approval.

A United Nations committee has urged the Australian government to prohibit the measure.

A Senate committee investigating the issue last year recommended the practice be regulated rather than banned. -AAP