Bringing the Aussie BBQ to the Channel Islands

The local population of Alderney, in the Channel Islands, have long found a range of alternative uses for the deserted bunkers built by the Germans during WW2. Now two enterprising Aussies have given one searchlight bunker the special green and gold treatment.

by Mark Archbold
in News 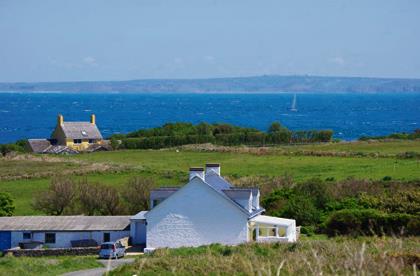 In June 1940 the entire population of Alderney, about 1500 residents, were evacuated. The Germans arrived to a deserted island and began to follow the orders to fortify Alderney as part of Hitler’s Atlantic Wall. The Germans (using forced slave labour) built bunkers, gun emplacements, air-raid shelters and concrete fortifications. There are about 600 WWII structures on the tiny island.

The population today is around 2090. Amongst this are about 10 Aussies who have found their way to this little Island for work and retirement, including two who have found a unique way of bringing a little bit of Australia to Alderney by way of an “Aussie BBQ Bunker”.

In March 2012 Mark Archbold and Bruce Florance decided to rent one of the old German bunkers. It had been classified as a “60 cm searchlight bunker” where the Germans had their searchlights to light up the waters off Alderney. After the war most of the bunkers fell into disrepair and a few were blown up by British forces. Today, most of the bunkers are used for storage or are open to the public. Many have absolutely sensational views of the surrounding waters or wildlife. Some are even added to many of the Victorian forts around the island. 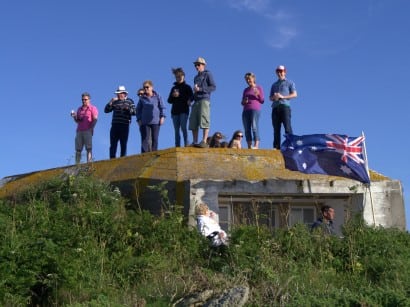 This particular searchlight bunker has been used since the war by a number of people for differing purposes, including as a pigeon coup. Now, after a lot of hard work and elbow grease Mark and Bruce have secured the bunker with doors and windows, and painted it internally.

The Aussie BBQ Bunker is fitted out with a BBQ, tables, chairs, sound system, 12v lights, a solar panel power system (to watch the cricket, AFL and NRL). It has views to France, the English Channel and across Alderney. Nearly every weekend you will find Bruce and Mark having a BBQ while taking in the views, often watching sailing boats racing from Cherbourg to Alderney.

The Aussie flag is raised every time Mark or Bruce are there, mainly to let other islanders know to drop in for a beer and a snag. In the early days when the bunker was used for a large birthday party for an Aussie who is the chef at the Georgian Hotel, over 40 people turned up for the event. A decision by Mark and Bruce was made early on that one of the internal walls was to be a “signature wall” where all who visit sign and date the wall. To date there is over 100 signatures. 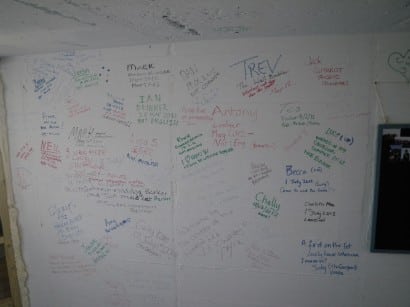 If you are at all interested in the history of the Channel Islands, or in particular Hitler’s Atlantic wall, Alderney is a must see adventure. Drop in the Aussie Bunker while you’re there for a taste of home and a beer with some friendly Aussies. Just look for the flag down by Alderney’s historic lighthouse.