We know the Chinese economy, due to its demand for our resources, is important to the Australian economy but does it have more influence over the Aussie dollar than our own economic data?

by Jim Vrondas
in News 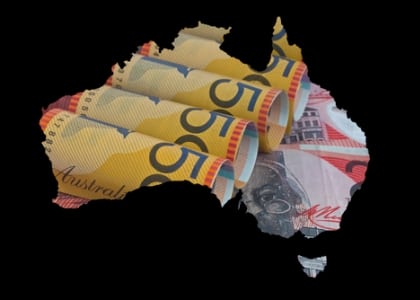 There has been a lot of data out of China and Australia over the last few weeks with the Aussie dollar moving back above 90 U.S cents.

We know the Chinese economy, due to its demand for our resources, is important to the Australian economy but does it have more influence over the Aussie dollar than our own economic data?

It is often difficult to get an accurate reading on exactly where the Chinese economy sits at any given point in time. In addition many people don’t take official economic data out of China seriously. Whether we like it or not we can’t ignore it especially since the markets react to it.

In March alone we have had the Chinese NPC annual gathering and an unchanged 7.5% 2014 annual GDP target (vs 7.7% in 2013), a massive blowout in the Trade Balance that turned from a 31.9 billion surplus to a 23 billion deficit, lower than expected consumer and producer price inflation and to top it all off Industrial Production fell to its lowest level on an annualised basis since May 2009. This has seen increased concerns around the prospects for economic growth out of China in 2014 and the expectation that officials will have to add more stimulus very soon.

On the other side of the equation the Australian economic data in March has been rather rosy with Building Approvals, GDP, Retail Sales, Trade Balance and Employment all coming in stronger than expected. The RBA has changed their stance as well moving to neutral rate setting with the possibility of rate rises to come and ceasing their attempts to talk the Aussie dollar down. 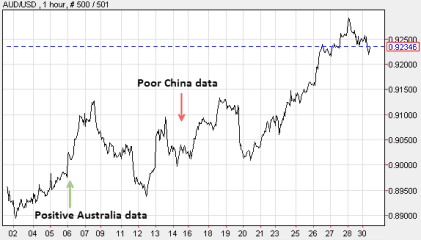 For the rest of the world the Aussie dollar is seen as a proxy to investing in China given our open market economy and commodity driven (to China) export economy. So quite often when China sneezes the Aussie catches a cold. But not this time.

Despite the sell offs this month in relation to the poor China data our dollar has proven to be remarkably resilient, trading 4% higher than where it was at the beginning of the month. Proving that domestic economic data, for the time being, is more important in the currency market’s mind than the potential slowdown in the Chinese economy.

I put this down in part to faith that the RBA has a good read on the economy and the transition out of the mining peak is, at this still early stage, moving in the right direction. Investors are also predicting extra stimulus in China will see a rebound in growth. Combine these with the fact the market is structurally very short Aussie dollars, the downside in the short term is limited to around 89 cents with 95 cents not entirely out of the question.

By Jim Vrondas, Chief Currency strategist, Asia-Pacific at OzForex, a global provider of online international payment services and a key provider of Forex news. OzForex Group Limited, is a publicly listed entity with shares traded on the Australian Securities Exchange under the code “OFX”.