Apology to refugees will come: protesters

Thousands of protesters have marched through the Sydney CBD to mark Palm Sunday, calling for an end to mandatory detention of asylum seekers. 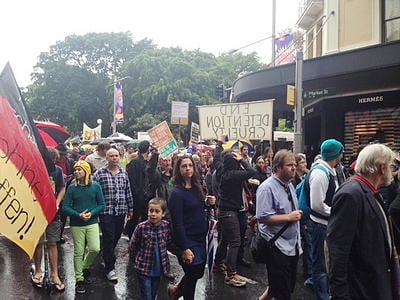 A future Australian prime minister will be forced to offer a national apology to asylum seekers kept in mandatory detention, refugee activists warn.

Thousands of protesters gathered in Sydney’s Hyde Park on Sunday to rally against the treatment of asylum seekers in offshore detention.

They joined a 2500-strong crowd rallying in Canberra and about 8000 demonstrators in Melbourne as part of the national event, organisers say.

Brandishing signs reading “What Would Jesus Do Scott” and “Inhu-Manus Island”, religious, immigrant and activist groups listened to speeches before marching through the CBD.

When Refugee Council of Australia representative Phil Glendenning said an Australian prime minister would one day be forced to offer a national apology to those kept in detention, they responded with a chorus of: “Shame!”

“Thirty, twenty years from now a prime minister of his country will rise in our national parliament and offer an apology to the damage done to them in our name,” he said.

“It’s not preventing deaths at sea – it’s about saying die somewhere else.”

A Hazara refugee herself, Sabira Nazeri, said the current policy was barbaric and used some of the world’s poorest countries as little more than a “dumping ground”.

She said during recent visits to Villawood she had found detainees more hopeless than ever.

With her four-year-old son sitting on her shoulders, marcher Lisa Fleming, 45, said she wanted to set him a moral example.

“I want my son to know that refugees are welcome here,” she said, voice wavering.

“There are times in your life when you have to stand up and say, look, I’ve had enough,” she told AAP.

Immigration Minister Scott Morrison’s office has been contacted for comment.