The Turkish government's controversial "renovation" work on memorials at Gallipoli has raised fears that an Islamist re-write of Anzac history is underway. 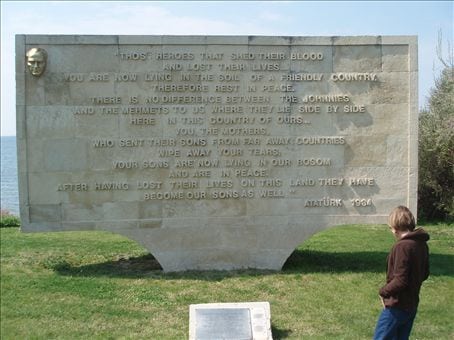 A memorial which honours fallen Anzac and Turkish soldiers at Anzac Cove is undergoing “renovation”. Suspicions have been raised that the refurbished version will reinterpret the Gallipoli invasion.

According to The Guardian, words popularly attributed to modern Turkey’s founding father, Mustafa Kemal Atatürk, comparing Australia’s and New Zealand’s dead ‘Johnnies’ equally to Ottoman ‘Mehmets’ and welcoming them to rest in his country have been removed from one of the key Gallipoli memorials (pictured above, before “renovation” work began”).

Some historians have raised concerns that the Islamist leanings of today’s Turkish leader may be behind a push to alter the orthodox history to a more Islamist perspective.

“It’s not always apparent to Australian visitors to Gallipoli, who tend to focus on the Anzac story, but another, Turkish, battle for Gallipoli has been going on for the past decade at least, between the formerly universally accepted Atatürk interpretation and the increasingly strong Islamist view,” University of New South Wales Canberra professor Peter Stanley was quoted as saying.

“Because the Erdoğan government is in power, Islamists are now in the ascendant – as the new Gaba Tepe interpretative centre at Gallipoli shows. It depicts Turkey’s 86,000 Gallipoli dead as ‘martyrs’, dying in a fight against Christian invaders.

“Hitherto, Turkish memorials on Gallipoli have praised Atatürk’s leadership. Their destruction preparatory to the ‘renovation’ of the Anzac Cove Ataturk monument signifies that the secularist adulation, formerly the orthodoxy, is being challenged and supplanted by a new, theocratic interpretation.”

Before its demolition, the 1985 monument bearing Atatürk’s words read:

“Those heroes that shed their blood and lost their lives – you are now lying in the soil of a friendly country. Therefore, rest in peace. There is no difference between the Johnnies and the Mehmets to us where they lie side-by-side here in this country of ours. You, the mothers who sent their sons from faraway countries, wipe away your tears; your sons are now lying in our bosom and are in peace. After having lost their lives on this land they have become our sons as well.”

Minister for Veterans’ Affairs Dan Tehan told the Guardian: “No Australian memorials or cemeteries are affected by this work. The Australian government is grateful for the work of the Turkish government in ensuring the peninsula remains in good condition and is cared for in perpetuity.”

Following the concerns raised in the media about the work to update the Anzac Cove memorial, the Turkish governmental authority responsible for Gallipoli monuments issued a statement denying any plans to change the words:

“There has been misunderstanding and rumours in some media outlets regarding the Turkish monument at Ariburnu,” the statement dated 19 June 2017 reads.

“The monument at Ariburnu is not being destroyed or altered. The stonework has been removed due to deterioration that has occurred over the years, and will be restored and replaced.

“Fifteen similar monuments on the peninsula are also being restored in the same way as part of a programme. With regard to those monuments, history is not being destroyed or rewritten, and Ataturk’s words will not be lost. The wording will be the same as in the past.”

We shall see if they keep their word.