ALP Abroad has expressed concern that London based voters seem unaware of the crucial Senate election currently being held in Western Australia. 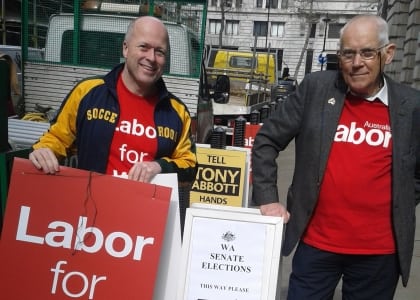 ALP Abroad President Paul Smith has expressed alarm that votes cast at the London booth are 75% below the vote in the 2013 Federal election in the crucial Western Australian Senate Election.

Australia House is the largest polling station in Federal election and in the 2013 Federal election1487 Western Australians voted in London.
In the first week only 131 votes have been cast compared to 526 cast in the same period in 2013- a drop of 75%.
ALP Abroad has expressed concern that voters seem to unaware of the crucial Senate election currently being held and this could lead to a record low number of votes being cast in a vital vote.
” Voters seem to be unaware that the Senate election is being rerun due to lost ballot papers but it is really important that people vote as there was only 14 votes in it last time, and every vote will count in determining whether the Tony Abbott with Clive Palmer controls the Senate,” Mr Smith said.
” I urge people to vote Labor in the Senate to protect Medicare, jobs and penalty rates and to send Tony Abbott a message.”
Voting in London is at Australia House, at  Melbourne Place entrance off The Strand,  between the hours of 12pm  to 630pm Monday to Friday. There is no voting on Saturday April 5th.
For further information about ALP Abroad contact Paul Smith on 07 939 240 228
IMAGE: Labor volunteers Paul Smith and Mike Steele at the Australia House (London) polling booth
Tags: ALP AbroadAustraliaAustralia House in LondonAustralian politicsAustralians voting in the UKGreat BritainpoliticsUK Australian NewsUnited Kingdomvotingvoting at Australia House in London