Volunteers for ALP Abroad distributed pamphlets at the second Test of the Ashes on the weekend, encouraging expat Australians in the UK to enrol as overseas voters for the upcoming federal election. 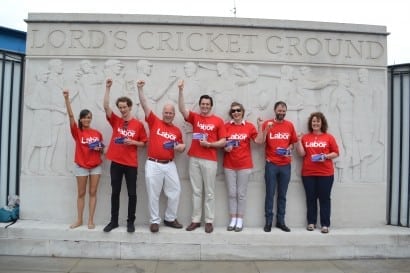 WITH England taking out the second Test on the weekend, Australian cricket fans at Lords had little to cheer about.

ALP Abroad instead focused on the economic record of Australia, handing out pamphlets outside the stadium with the message: “After the Ashes, come home to a strong economy.”

The overseas arm of the Labor party used the third day of the second Test to launch its overseas voter enrolment drive.

Volunteers distributed flyers with a smiling Prime Minister Kevin Rudd encouraging voters to ensure they are enrolled overseas and able to vote in the upcoming federal election.

Paul Smith, President of ALP Abroad, said it was important voters in England were aware of the need to enrol as an overseas voter.

“The votes of the 1 million Australians could be decisive this election but most overseas Australians will need to enrol to vote as an overseas voter to make sure their vote counts,” said Mr Smith.

“We are encouraging overseas Australians to enrol to vote as overseas voters so they can vote for an Australian government they can be proud while they are overseas and a country that will still have a strong economy when they return.”

Mr Smith said out of the estimated 1,000,000 Australians overseas only 16,000 are currently enrolled as overseas voters.

Australians living overseas can register as an overseas voter if they intend to return to Australia within six years.

The votes of the Australian expat community in the UK could prove important in any contest between Mr Rudd and Opposition Leader Tony Abbott.

According to the Australian High Commission there are currently an estimated 300,000 Australian expats living and working in the UK.

In in the 2010 election Australia House in London was the largest polling station in the federal election. It is estimated 16,000 Australians living in the UK voted in the last election.

Australians can follow these three steps to ensure they can vote as an overseas voter.