AFL boss backs McGuire to stay with ‘Pies despite breach

The AFL has backed Collingwood’s refusal to stand down president Eddie McGuire for his racial comment directed at Sydney player Adam Goodes. 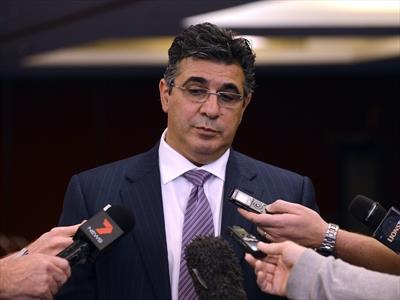 Collingwood’s board gave McGuire its full support on Thursday after McGuire had been forced to apologise for his comments during a radio program.

McGuire had suggested Sydney’s dual Brownlow Medallist Adam Goodes could star in a promotion of the new King Kong musical.

Goodes was also called an “ape” by a 13-year-old Magpies fan during last Friday’s Collingwood-Sydney game at the MCG.

“He (Goodes) was shattered and spent most of the day trying to come to grips with why this has occurred, particularly after Friday,” Demetriou told reporters in Brisbane.

“It was a comment that whatever he chooses to say, and however he puts it, racially vilified Adam Goodes.”

“He is as you imagine quite distraught and disappointed with his comment,” Buckley told reporters.

“We support him. It was just a bad moment, a poor comment and Eddie has … apologised unreservedly.

“The person who is being hated at the moment is actually Eddie, for his comments, and he accepts that.

“We want to cut down the tall poppies and the people who are prepared to stick their neck out and stand up for something and elicit positive change in society as Eddie has done over a long period of time,” Buckley said.

“He has a made a mistake …. but I don’t that compromises the ability for him to do great things in a very positive manner from this point on.”

“While we accept that Eddie made a mistake that caused serious offence to Adam Goodes and many more, we balance this against the work Eddie and the board have done, and continue to do, to make Collingwood an institution in football and society that our entire family can be proud of,” Kennedy said.

Sydney coach John Longmire will allow Goodes to make his own call on whether he feels mentally fit to play against Essendon at the SCG on Saturday.

“I expect him to play. If that changes I’ll support Adam in whatever he wants to do.”

Buckley will speak with Brazil-born defender Harry O’Brien – who has been critical of McGuire’s comment – and indigenous forward Andrew Krakouer about their participation in Friday’s Gabba clash with Brisbane.

“I’ll sit down with the guys … to see where their head space is at,” Buckley said.