Australia’s incoming prime minister Tony Abbott has spent the first working day of his government getting things in order, as Labor looks for a leader. 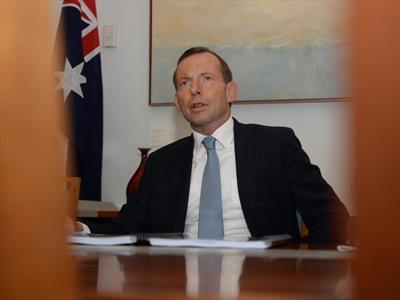 His mind is also turning to how to get legislation to repeal the carbon and mining taxes and toughen Australia’s approach to asylum seekers through a minority-influenced Senate in the coming months.

“My job is to be respectful and courteous of every member of parliament – that includes independent and minor party MPs,” Mr Abbott said on Monday.

“But in the end they all need to respect the government of our nation has a mandate and the parliament should work with the government to implement its mandate.”

Labor frontbencher Chris Bowen, who on Monday nominated himself as shadow treasurer in the ALP opposition, criticised Mr Abbott’s decision not to bring parliament back until late October or early November.

“I thought we had an emergency on our borders and a crisis in our budget,” Mr Bowen said.

“Apparently everything is not all that urgent now.”

Mr Abbott is expected to attend both the APEC summit in Bali and the East Asia Summit in Brunei in early October.

The incoming 28th prime minister said he was being “purposeful, methodical, calm and conscientious”.

“The last thing I want to do is to rush the parliament back for a photo opportunity,” he said.

The coalition’s asylum seeker plan, Operation Sovereign Borders, won’t start until after the new ministry is sworn in early next week.

Mr Abbott said he wouldn’t be surprised if people smugglers tried to test his government’s resolve.

Mr Truss, who will take on the transport and infrastructure portfolio, said the Nationals would have at least 20 members in the 44th parliament.

“Under the coalition arrangements the positions are divided according to the number of seats we have in the coalition room from each party,” Mr Truss told Sky News.

Meanwhile, Labor is now turning to settling on its new parliamentary leader but the two likely contenders, Bill Shorten and Anthony Albanese, have yet to say publicly if they will stand.

If they both contest the leadership, there will be a vote weighted 50 per cent to the caucus and 50 per cent grassroots members, following a rule change just before the election was called.

As well, former foreign minister Bob Carr may not be around for long amid speculation he will stand aside in his NSW Senate seat for Australian Workers Union boss Paul Howes.

Neither Senator Carr nor Mr Howes confirmed the speculation on Monday.

As vote counting continued, the coalition was ahead in 87 lower house seats, to Labor’s 57.

The Australian Greens’ Adam Bandt, and independents Bob Katter and Andrew Wilkie were on track to hold their seats, and the seats of Fisher, Fairfax and Mallee were not yet determined.

The Senate count continues, but the crossbench could include senators from the Palmer United Party, the Liberal Democrats, the Australian Motoring Enthusiast Party, Family First and the Australian Sports Party.

Incoming minister Christopher Pyne said he believed it would be easier to deal with centre-right micro parties in the Senate after July 2014 than Labor and the Greens. – AAP